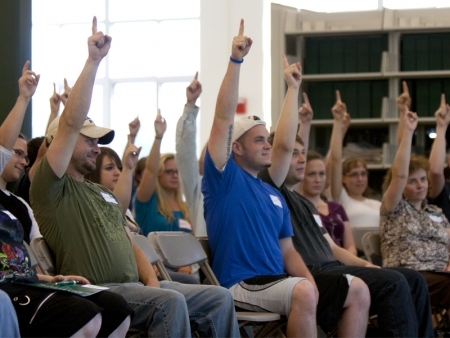 For the second consecutive year, many of New Hampshire's community colleges are seeing double-digit enrollment increases as school opens for the Fall semester.

"In 2009 we saw a 12 percent enrollment increase system-wide, adding over 1,000 students to community college campuses across the state," said Shannon Reid, Director of Communications for the Community College System of New Hampshire (CCSNH). In 2010, although the numbers will not be official until later in the month, several of NH's community colleges anticipate increases of more than 10 percent for a second consecutive year. This is also the 12th consecutive year of enrollment growth for CCSNH, which now serves more than 15,000 students per semester.

College officials are not surprised by these numbers. Bruce Baker, Vice President of Enrollment Management at Great Bay Community College in Portsmouth, sees trends similar to 2009, when college enrollment increased by more than 10 percent. "We are seeing the same strong interest in the liberal arts program, which is typically the program chosen by students who intend ultimately to transfer to a four-year college or university," said Baker. With transfer program enrollment holding steady, Baker reports that GBCC is seeing growth this year in several career programs, notably criminal justice, computer technology, accounting, and education, which he attributes to the economy, as students seek to align their education with the job market.

At NHTI, Concord's Community College, Admissions Director Frank Meyer is seeing so much demand that advisors are counseling students into online and weekend classes to respond to the space crunch. "I think the whole idea of community colleges in New Hampshire has finally caught on," said Meyer. "The work that was started a decade ago to develop the community colleges has come to fruition. When potential students and their families come for tours, they see a real campus, a real college." NHTI, which grew 16 percent last year, may see similar increases again this year. "We saw evidence of continued strong demand throughout the year, with heavily attended open house events, more people coming for campus tours, students paying their registration deposit earlier than usual," Meyer said. "Affordability is a big factor.”

Larissa Ruiz Baia, Vice President of Enrollment Management at Manchester Community College, agrees. "We are seeing a high number of traditional-age students coming to us in large part because of affordability, who might not have considered a community college in the past," she said. Baia reports strong growth in transfer programs, indicating that last year's increases were not just a one-time bump. So far MCC has been able to find space for all the classes and students, according to Baia, "but we're busy."

White Mountains Community College in Berlin anticipates its final enrollment numbers will show roughly a 12% increase over last fall. "We're seeing families and students who certainly could have gone to a four-year college but are very conscious of cost and really trust the transfer option," said Mark Desmarais, Director of Admissions at WMCC. "They know that after one or two years here they'll have the option to move on." Desmarais also notes increasing numbers of older students returning to college or enrolling for the first time. Career programs like nursing, medical assisting, welding, automotive technology, and culinary arts are showing strong enrollment. WMCC's new baking and pastry arts program, started last year in new cooking labs, is also proving popular this fall.

Chuck Kusselow, Admissions Director at River Valley Community College in Claremont and Keene, can list several programs that quickly filled to capacity as the college faced enrollment increases of 15% over last year. According to Kusselow, programs like Occupational and Physical Therapy Assistant, Respiratory Therapy, and Medical Assistant are full, and students on wait lists are taking general studies courses until they have another chance for acceptance into the programs next year. Kusselow noted the growing demand for the college's new Business Management program, steady demand for Nursing, and a near doubling of demand for its Clinical Lab Technician program. "It's a sign of the economy," said Kusselow. "People come in looking at the programs we offer and ask “are there jobs and what do they pay?" We see many students in their 30's, 40's, and 50's who are willing to retrain for 2 years in order to prepare for a job with a salary that will enable them to manage things for their families.” Kusselow also notes strong interest in transfer programs among recent high school graduates, particularly those from the surrounding communities. “People are opting to go to a community college to start rather than starting at a four-year college. With the community colleges fully accredited, families are seeing the value of starting locally with us and then transferring to a four-year college in their sophomore or junior year.”

At Nashua Community College, Admissions Director Patricia Goodman said admissions activity over the summer was noticeably stronger than in past years, and the college admitted more new students this fall than ever before. Recent changes and additions to the campus have enhanced the “college feel” at NCC, including a new sports program with men’s and women’s intercollegiate basketball teams. “People who haven’t been here in a while are shocked at the changes they see,” said Goodman.

Lakes Region Community College Admissions Director Wayne Fraser sees growth in career and technical fields like marine technology, automotive technology, and fire protection, which are all completely full this semester, as well as continued growth in the liberal arts program. “We have increasing numbers of younger students whose goal is to earn a four-year degree and who recognize the cost savings of starting at a community college and transferring,” said Fraser. Fraser cites affordability and strong transfer pathways as driving this trend. Fraser also notes growing numbers of students who enroll in the college’s liberal arts program in order to prepare for competitive capped programs, like nursing, which have wait lists. Fraser said one way the college is dealing with the space crunch is by scheduling additional class sections outside the typical school day.