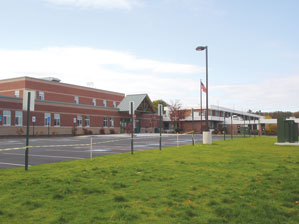 Four students majored in visual arts when New Hampshire Technical Institute opened that program in September 2006; there should be 38 by the end of this semester, said department head Susan Haas. But there's not much you can do with a two-year art degree.

"I think NHTI's visual arts program is going to be seen as a real feeder for four-year colleges," Haas said. She's forming credit transfer agreements with MassArt, New Hampshire Institute of Art, Keene State, Plymouth State, UNH, the Art Institute of Boston, Maine College of Art and Merrimack College and will continue to seek more. NHTI's curriculum is equivalent to the first two years of a bachelor's degree and is geared to help students build strong portfolios, Haas said. It's the only visual arts major in the state's community college system that Haas is aware of.

With the cost of private four-year universities in the ridiculous range (some charge more than $45,000), are more kids starting out at New Hampshire's public two-year colleges to save money?

"I think it plays a big part," said Jan Phelps about enrollment growth at New Hampshire Community Technical Institute-Manchester. Enrollment there has increased steadily over the past four to six years, she said. Since the 2002 change in accreditation to a comprehensive community college system, the number of Manchester students who transfer to four-year programs has grown substantially, Phelps said.

Enrollment throughout the system has been "growing dramatically over the last decade," said Shannon Reid, a spokesperson for the system. All of the seven campuses are building, renovating or planning to do so.

Jessica Bright, 21, of Merrimack hopes to be studying journalism and communications at Emerson College in January. She's in her second year at NHCTC Manchester and has also applied to Northeastern University, Suffolk, Bryant and Keene State. She won't hear back until December, she said.

Bright took a year off after high school and wasn't sure what she wanted to do. She attended an NHCTC open house. Enrolling "just seemed like right thing to do at that time," she said. After starting classes, she decided to major in liberal arts to get general education requirements out of the way, then transfer to a bachelor's program.

NHCTC class sizes can range from about four to 25 students. That's important to Bright. She decided against applying to UNH because of its size.

"I think being at a school where I lived at home helped me focus on academics more than if I moved away," Bright said. She's visited friends who left for college, and thinks that option offers an opportunity to "find yourself." Bright plans to live at Emerson if she goes there. She's pleased with how things turned out but is disappointed that Manchester is adding a journalism course next year, too late for her — "That's all I'd wanted," she said.

Bright said she'll have to take out loans for her bachelor's: "The next two years will be pretty expensive," she said.

Ryan Davis, 20, of Manchester hopes to transfer to SNHU as an accounting major. He returned to the state after a semester at University of Arizona. During his first semester at NHCTC Manchester, he decided to continue on for a bachelor's. He works almost full time and pays about $3,000 per semester with the help of Stafford loans, he said. SNHU's tuition is about $22,000, so he's saving a lot, but he will need to borrow more, he said.

The consensus of the guidance staff at Manchester Memorial High School is that in the past two years they've seen more applications for technical and two-year post-secondary schools than ever before. But that doesn't mean fewer students are applying to four-year schools. Rather, kids who wouldn't apply to any program are now realizing the benefit — and the community college system has been actively recruiting at high schools, they said. Students whose goal is to attend big-name universities usually go regardless of the cost. Yet the counselors are also seeing more students choosing to help their families by being at home while helping themselves by attending community college.

The system overall has seen both an increase in students who transfer out, and a drop in the average age of students over the past six to eight years, Reid said. That indicates the system is attracting more recent high school graduates who plan to transfer.

The number of adult learners increased somewhat too, Phelps said. Some are seeking to change careers; others want to upgrade their skills.

More than 100 system classes are online. There are eight-week courses, weekend classes and other flexible delivery methods. Community colleges can usually respond fastest to changes in technology or the economy, Reid said.

By the way, the campuses will most likely seek new names in January. That's an outcome from the July 1 switch of the system from being a state agency to self-governance through trustees. The name has changed from NHCTC to the Community College System of New Hampshire.

"When people look at the community colleges we want them to see vibrant, attractive colleges — not an institution that's part of a state bureaucracy. We think that makes a difference to students," Reid said.

It also means campuses can have more individual identities, Phelps said. The Manchester campus separated from Stratham a couple years ago and branded the school "Manchester's Community College," she said. It offers some programs the other schools don't, like welding, medical assisting and exercise science.

Massachusetts students attend NHCTC Manchester for some of those same subjects, Phelps said. Those and things like machine tool technology in Nashua are pretty rare in Massachusetts these days. The state's 15 public community colleges have some unique and interesting classes but fewer in trade or technical training.

NHTI has the only dental hygiene program in the system and the only dorm. Almost 5,000 students are enrolled. To account for part-timers, there's a measurement called full-time equivalent. NHTI's FTE for fall 2006 was 3,189. It was 2,085 in 1999, said NHTI spokesperson Alan Blake. Growth has been flat in programs like nursing and dental hygiene for the past two to three years because they are physically at capacity.

NHTI opened a new student center in 2006 and a new dental education building in 2004. They will break ground on a $7 million nursing building in the spring. There have been federal earmarks for projects in the past, and sometimes industry contributions, Reid said; the New Hampshire Dental Society gave more than $300,000 and equipment toward a dental facility at NHTI.

Nashua is using portable structures to deal with overcapacity.

"I think we'll continue to need space," Reid said. They will upgrade the automotive technology facility in Manchester as a response to student demand and new industry requirements, Reid said; $3 million was appropriated for the first phase. Manchester also wants to build a student center with more classroom space.

"We have a pretty active student life organization on campus," Phelps said. They opened a new 50,000-square-foot, $9.1 million academic building this fall, their first in 40 years. It includes space for a new library, science labs, medical assisting labs and computer labs, Phelps said.

"New Hampshire college graduates have one of the highest student loan burdens in the country, so it is important … that community colleges grow to provide affordable opportunities," Reid said.

NHTI's dorm is full at 350 students. Reid said 99 percent of New Hampshire residents live within 25 miles of a CCS campus. Some have satellite centers.

New academic buildings and major renovations are funded through the state capital budget. Requests are made every two years, Blake said. Tuition income feeds the operating budget. New construction of non-academic things like student centers is supported by student fees, which go toward debt service.

"We're going to be very careful about increasing student fees," Reid said. They cost between $4 and $16 per credit. The system froze tuition for a year, increased it in 2007-2008, and plans to freeze it again for 2008-2009, Reid said. Like other institutions, the system is affected by increases in employee benefit and utility costs. Upgrading security and technology are other factors.

So why is the state putting up so much money now for the colleges? The state just launched a job training fund that offers matching money for employers who want to help employees upgrade their skills — with the community colleges as preferred providers.

Phelps said the state's investment reflects a recognition of the system's importance. But here's the kicker — the community college graduates stay in New Hampshire.

"When they talk about brain drain in New Hampshire, Community College is one of the institutions stemming the tide," Phelps said.