Apply for federal CRRSA funds to cover tuition and other costs for spring semester. Visit our Tuition Assistance page for full details. Learn more about how MCC is responding to the COVID-19 health situation.
Menu
Apply Now! 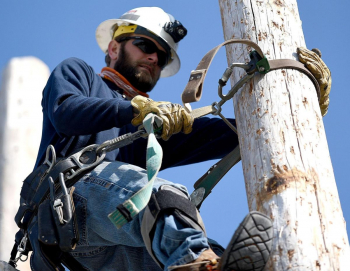 Lineman apprentice Dan Shennett of Epping adjusts the straps connected to his harness while climbing at the Eversource training center in Hooksett recently.
Photo by David Lane, Union Leader

Earn while you learn.

That’s been the successful strategy for hundreds of people looking for new careers or to advance within their companies.

An apprenticeship helped 20-something Hannah Izbicki of Weare shift from bartending and waitressing in Epping to working at Catholic Medical Center in Manchester as a licensed nursing assistant.

“It’s less of a stressor being in the program knowing I’m changing my life in a positive direction, learning and also making money as well,” said Izbicki, who is attending nursing school to become a registered nurse. “I wanted to get my foot in the door to a career that would be really rewarding.”

Employers gain by lining up guaranteed workers who will be trained to their standards.

“I think it’s a great way to retain talent when it’s here, and as far as attracting talent, I think the apprenticeship is a great way to attract people,” said Alysa Southall, who works in human resources at Cobham Advanced Electronic Solutions in Exeter.

The Community College System of New Hampshire, which administers the program, works with businesses to develop apprenticeships, allowing people to earn salaries while learning on the job. Class instruction typically is included.

Since 2016, the program has enrolled 230 people in apprenticeships, including 140 new hires, according to Emily Zeien, the program’s grant manager. More than 90 people are active apprentices.

People from their teens to beyond 50 have participated.

“Mature workers are most definitely embraced in the program,” she said. “We have many examples of apprentices who are older and have used apprenticeship as a way to start a new career.”

ApprenticeshipNH, operating with more than $5 million in federal funding, offers scholarships and help with transportation, child care, textbooks and supplies for those showing need.

“Apprentices are hired by the company and are considered employees from the start of their apprenticeship,” Zeien said. “They receive a wage from the employer while participating in on-the-job training.”

Many employers cover tuition and pay apprentices for time spent in class, too, she said.

The ApprenticeshipNH partnership typically gives employers a say in what apprentices learn in the classroom to better match what employers need, according to Brian Bicknell, president of Manchester Community College.

“It brings industry and higher education closer together,” Bicknell said. “It’s a greater alignment between what’s going on in a classroom and what’s happening on the job.”

Apprentices may receive college credit if they are in credit-bearing classes at the college.

“Every apprentice receives a national occupational credential from the U.S. Department of Labor when they complete the apprenticeship,” Zeien said. “It is industry-recognized and transferable throughout the nation.”

Cobham, which employs 400 workers at two sites in Exeter, plans to use New Hampshire’s model to start apprenticeships in four other states, including California and New York.

“I think the return on investment is there because we see that it contributes directly to our workforce,” Southall said. “They have the skills and knowledge.”

Emily Gaudette, who works in the human resources department at Catholic Medical Center, said the apprenticeship is “completely customizable” to meet the hospital’s needs.

“We are developing apprenticeship programming for additional occupations, including pharmacy techs and surgical techs based on current and future forecasted trends with these jobs,” Gaudette said.

“The apprenticeship program sets up a win for both employee and employer, where the employee is having their education paid for and being compensated for their time spent in the classroom,” she said.

“The employer can make the hiring decisions based on personality, professionalism and other factors that make them a great fit for the organization, knowing we have the opportunity to train them and allow them to learn their new occupation within our own setting,” Gaudette said.

Before the pandemic, many employers struggled to fill job openings in industries ranging from fast food to manufacturing. That remains the case for some industries.

Rather than trying to hire new people, some companies have turned to offering apprenticeship opportunities to retrain current employees.

“Their apprentices were already working for them, but they gave them an opportunity to be on a track to better themselves within the company and move within the company,” said Kristine Dudley, director of the Workforce Development Center at MCC.

How, why it works

Meghan Savage joined Cobham the summer after graduating Pinkerton Academy in 2018. She took a welding class her senior year and was hired for that trade.

Within a few weeks of getting hired, the company started an apprenticeship program that she joined. She learned about business etiquette, leadership skills and how to work effectively with others.

“I think it did give me a leg up,” said the Kingston resident. “It helped me be more involved in the company.”

Jeff Parlee, an apprentice mentor at Cobham, has had a similar experience.

“Through the program, I feel they get a better understanding of the company as a whole, the processes that we do, and that I think sets them up for better success overall,” Parlee said.

Before Eversource New Hampshire President Joe Purington came to the Granite State, he developed a certificate program at a Maine community college.

“I saw a model of what was very successful in Maine,” he said. “How do you replicate it and make it better?”

He worked with MCC to develop an electrical line worker certificate program. Some of those candidates feed into the utility’s apprenticeship program, which requires 7,000 hours of mostly on-the-job training.

“It’s a struggle to get fully qualified line workers to come to want to work at a utility and stay,” he said.

Things are working out well enough that Eversource is talking to MCC about establishing a two-year degree program for substation workers that could start in 2021.