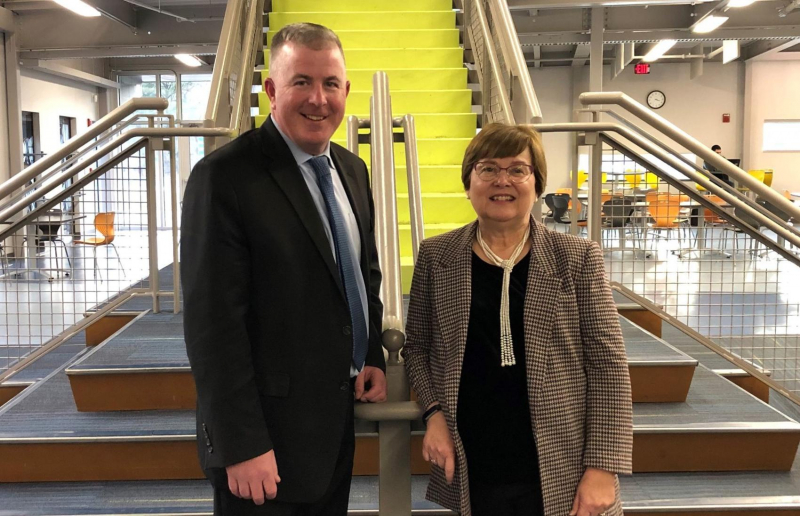 Brian Bicknell, vice president of academic affairs, will take over as interim president at Manchester Community College when President Susan Huard retires at the end of the semester.
Photo by Jonathan Phelps, Union Leader

Shortly after becoming the president of Manchester Community College nine years ago, Susan Huard came up with one of her many goals.

“One of the things that frustrated me when I first came is people referred to this place as ‘the Tech,’ so they only saw one aspect of what the college does,” she said. “My fantasy was to walk down Elm Street and not have a single person say to me, ‘Oh, you work at the Tech.’ Now people say, ‘You work at MCC.’”

Huard will retire at the end of the semester and hand the reins over to Brian Bicknell, vice president of academic affairs. He will serve as interim president for six months as the college undergoes a national search. The transition will happen in the middle of a five-year planning process for the college and Huard thought it was a good time to step aside.

“I have great faith in him,” Huard said. “I think he’s proven in the last three years he has done a great job.”

Huard, who became president in July 2010 after a decade as dean of learning and student development at Quinebaug Valley Community College in Connecticut, has grown student enrollment, increased graduation rates and expansion of programs and facilities, according to the college.

“I would say that the college has changed significantly,” she said. “We’ve just about doubled the student population and expanded programming in every area in college.”

The new programs have included advanced manufacturing, behavioral science, computer science, electrical technology and health care. The nursing program has connections at many of the local hospitals.

“I’m proudest of representing the college in the community and getting people to understand and appreciate what is here,” Huard said.

Bicknell became aware of the college during “MCC Day” at a New Hampshire Fisher Cats game several years ago.

“When I got home, I started looking it up online,” he said. “What I loved about it is it’s a comprehensive community college.”

He came from Benjamin Franklin Institute of Technology in Boston in July 2016.

Some of the growth in programming at MCC is in cyber security and cloud technology.

The state has a growing need for automation and data specialists needed to support the technology, he said.

“We’re working on getting federal grants to help improve our programming around that,” Bicknell said.

She also worked to revamp some of the classrooms.

“It’s hard to tell where the front of the room is,” she said. “I want our professors in among our students and interacting with the students. We’ve accomplished that in a number of spaces. It really has changed how our faculty approach education.”

Huard will continue to work with the community college system part-time as a health care representative.

Her advice for Bicknell?

“Stay focused on the students,” she said. “I love the college’s motto, which is to learn and to serve. As long as that is what we keep doing, this place will keep going and going.”