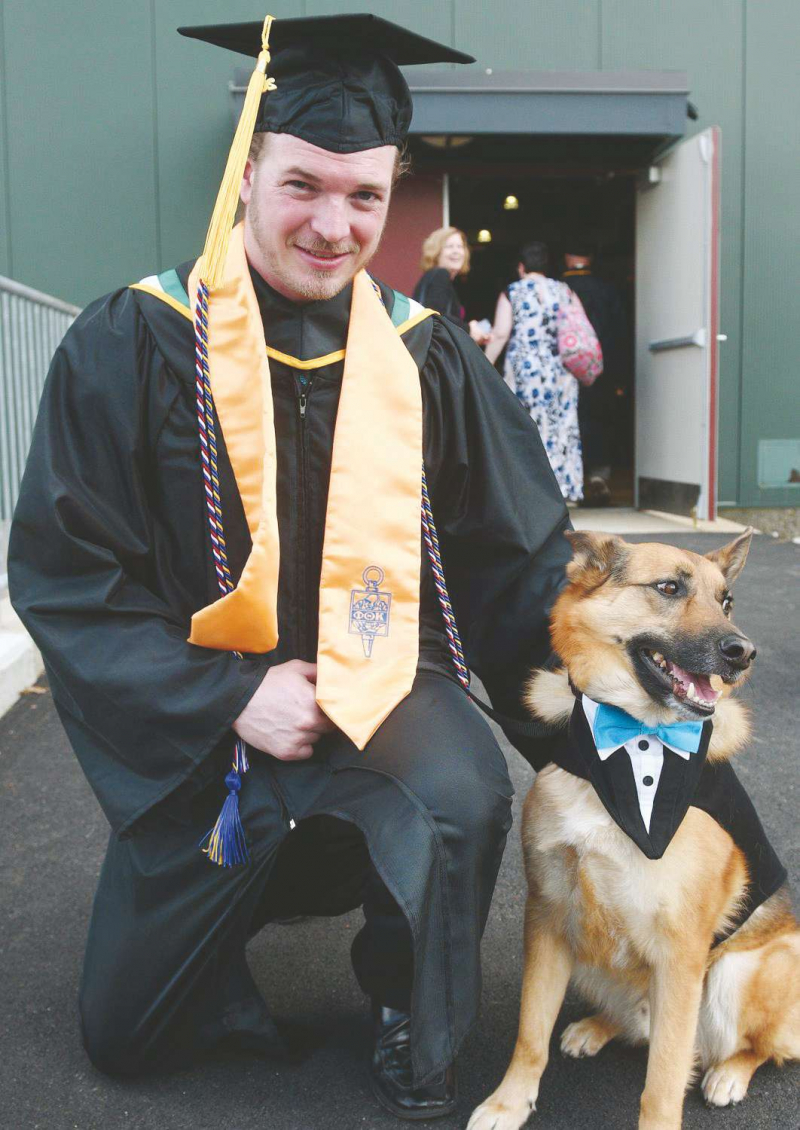 Hampstead’s Jeremy Clague can add a new line to his resume — college graduate.

“Tomorrow you will all be graduates from Manchester Community College, and set off into the community to help improve the lives of others and become a bigger part of our community,” Clague, this year’s student speaker, told fellow graduates. “I use this word community a lot, because to me it means coming together for a greater cause.”

Now 29, he joined the Marine Corps in 2007 shortly after graduating from Pinkerton Academy in Derry. He completed two tours overseas, one in Iraq and one in Afghanistan. In an explosion very close to a vehicle he was riding in, he said he suffered a “pretty severe concussion” in October 2010.

“It was a controlled detonation, set off by British forces,” said Clague. “It was 18,000 pounds of improvised explosive device, meant to simulate what the Taliban uses, and we were just too close when it went off.”

Clague said he recovered quickly and was able to finish his tour and head home. But nine months after returning to the U.S., he was struck by a vehicle on Aug, 4, 2011 while riding his motorcycle to work.

“I was changing lanes, and a car changed lanes into me from behind,” said Clague. “I flipped over and landed on my head. Thankfully I was wearing a helmet, or I might not be here today.”

Clague said he was eventually forced to retire medically from the Marines.

“I had planned to stay in the Corps for life,” he said. “I was training to become an embassy guard at the time, and even dreamed of being the Sergeant Major of the Marine Corps one day. All of this was cut short with a simple piece of paper and a quick ceremony. I felt lost, and confused, dealing with my injuries as well as suffering from PTSD.”

Clague said that all changed when he met Buddy, his German shepherd service dog.

“He completely turned my recovery process around so that I could be successful,” Clague said. “I was a Marine. I didn’t want to go to therapy, but he helped me through. He has been by my side for five years now and I couldn’t imagine any of this without him.”

In October 2013 Clague moved back home to New Hampshire to be around family and friends and pursue occupational, physical and intensive mental health therapy.

“I have finally found myself again,” said Clague.

During his time studying neuropsychology at MCC, Clague served as president of the school’s Veterans Club and a voting student member of the Community College System’s board of trustees.

He plans to attend UNH-Manchester to work toward his bachelor’s in neuropsychology, then earn a doctorate so he can help trauma patients directly — just as he was helped.

During commencement Clague received the President’s Award, presented to the student with the highest grade-point average — in his case, a perfect 4.0 GPA.

More than 65 associate degree and certificate programs are offered at MCC.

“Our graduates have made outstanding use of their time, energy and resources and this is a milestone for them,” said MCC President Susan Huard.

Nicole Guidoboni, now a global buyer/planner for GL&V Pulp and Paper Group in Nashua, was the keynote speaker.

She graduated from MCC — then known as New Hampshire Technical College at Manchester — in 1991 with an associate in applied science in welding technology and served as an adjunct welding instructor at her alma mater from 2004 to 2012.

“Today we celebrate your accomplishments because you have achieved a very important goal,” said Guidoboni. “You have earned an important credential which will help you begin a new career, or lead to a higher position on your current career path, or transition to your next educational milestone. Take the time to do what you enjoy — work to live, don’t live to work.”