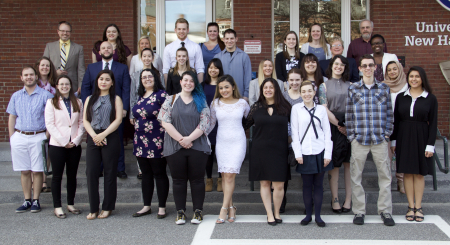 The Community College chapter, which also inducted two Nashua Community College students, is affiliated with the UNH-Manchester chapter, but will have its own programs and activities while also sharing events and fundraising with UNH-M.

Founded in 1922, Beta Beta Beta (TriBeta) is an honor society for students, particularly undergraduates, dedicated to improving the understanding and appreciation of biological study and extending boundaries of human knowledge through scientific research.

Individual membership in TriBeta is through a chapter on the campus of a four-year accredited college or university. TriBeta members are: biological or life science majors who have completed at least one term of the second year of a four-year curriculum or its equivalent; completed at least three semester courses in biological science, of which at least one is not an introductory course, with an average grade of B or its equivalent in those biology courses; have a minimum B average in all courses; and, be in good academic standing.