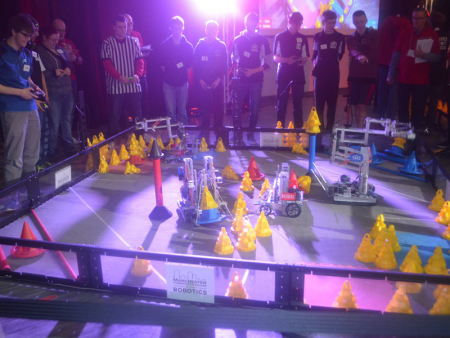 Students compete in the VEX Robotics Competition at MCC on February 17, 2018.

The top 80 teams from New Hampshire and Vermont have been whittled down to a few top performers from the NH/VT State Championship VEX Robotics Competition at Manchester Community College February 17-18, 2018. High schoolers, middle schoolers and elementary students spent the weekend at MCC competing for the right to advance to the championships in April.

The high school winners from Saturday are:

The program teaches STEM skills to students, while training the next generation of engineers and high-tech leaders how to compete using creativity, science and a spirit of competition.

"This year's events were highly competitive and it is inspiring to see these young people embrace science and technology and apply what they have learned in such and exciting way," says Dan Larochelle, Advanced Manufacturing and Robotics Professor, at MCC.

Sponsored locally by Macy's Industries and ESTEM and MCC Robotics, admission is FREE to the public. The VEX Competitions are among the world's fastest growing competitive robotics programs for elementary schools, middle schools, high schools, and colleges around the world, now approaching 20,000 teams in over 45 countries. Organized by the Robotics Education & Competition (REC) Foundation, the competition season culminates each spring, with the VEX Robotics World Championship, a highly anticipated event presented by the Northrop Grumman Foundation and the REC Foundation, which unites top qualifying teams from local, state, and international VEX Robotics events to crown World Champions.

More information is available at www.mccnh.edu/robotics. For details on additional upcoming events, visit www.RobotEvents.com. For more information about the REC Foundation, go to www.RoboticsEducation.org.