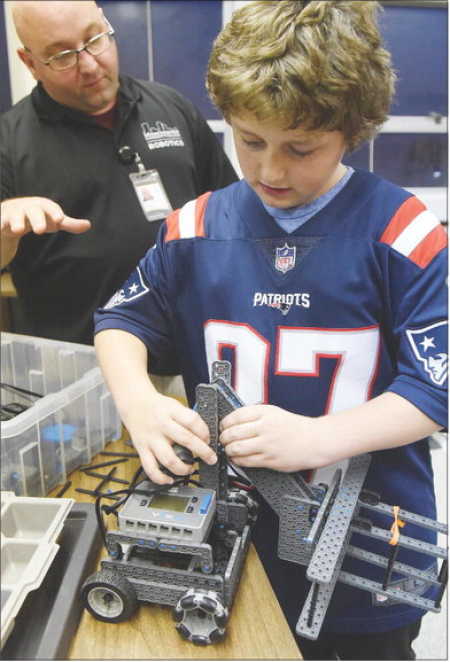 Candia librarian Sue Demanche snagged a grant this year to receive a free $500 robotics kit for sixth-graders to participate in VEX robotics competitions.

“This has been so much fun,” she said. “The kids are so engaged and engrossed.”

Demanche’s grant funded a team of six students at the Henry W. Moore School after she lost out on state education department grants to start a team.

Manchester Community College and the Robotics Education & Competition Foundation in Texas have partnered to fund and launch 100 new Granite State teams. Jan. 15 is the deadline for schools and youth organizations to apply for grants. So far 15 teams have received grants.

“The whole intention of this grant is to get more robots in people’s hands,” said Dan Larochelle, who’s overseeing the effort. “That’s why we opened it up to homeschoolers, Girls Scouts, Boy Scouts, private schools, public schools.”

Last fall, the state Department of Education’s training fund allocated $375,000 to start robotics teams, Larochelle said. It received 140 applications but could only fund half that many.

Demanche said her state application was rejected because the team didn’t have enough students on free or reduced school lunches.

She said the school wouldn’t have fielded a team without the grant. A parents group funded a second robotics kit, and the six-member team was split in half with hopes of expansion, Demanche said.

Her son, Gabe, is a Pinkerton Academy sophomore on that school’s VEX team and helps out with the Candia teams.

Larochelle, who previously worked for the Texas foundation, said the robotics competition encourages cooperation, even among teams.

Below the high school level, “these robots you can drive with a joy stick,” he said. “You have instant success and basically start building (students’) confidence, then they ask, how do I program this? How can I make it better?”

A VEX IQ competition is slated for Saturday at Trinity High School in Manchester. Manchester Community College is hosting a VEX robotics rookie team workshop on Jan. 6 at the college to help teams build their first robot, learn simple programming and competition rules.

More information is available by contacting Larochelle at This email address is being protected from spambots. You need JavaScript enabled to view it..