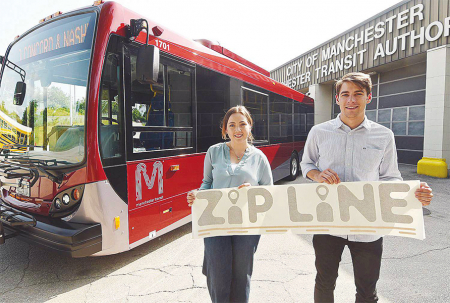 City transit authorities on Friday unveiled two new city buses with a sleek, modern look — the first step in a three-year process that will see the 24-bus fleet upgraded as old buses are retired and new ones brought on line.

The rebranding is the first for the service since it was established as the Manchester Transit Authority 43 years ago.

“We’re excited about the changes,” said Mike Whitten, Executive Director of the MTA. “We’ve accomplished a lot, and there’s more to come.”

The local transit authority is also planning to add evening service along two routes, all in an effort to better meet local transit needs, modernize the service and increase ridership.

“That means we will have bus service in the city along those routes up to 9:30 p.m.,” said Whitten. “It’s the number one (thing) we hear about from riders that they want to see, and it’s primarily college students. If you’re a shift worker or taking evening classes, you can get there using the bus but there’s no way to get home when you get out.”

“Right now, we operate on hourly schedules along major corridors like South Willow Street,” said Whitten. “That doesn’t work for someone looking to make a quick trip; they’ll find some other way to get there. I would like to see us maybe offer runs every 30 minutes; I think there would be demand for that.”

According to statistics provided by Whitten, the MTA served 443,706 transit passengers in fiscal year 2017, which ended June 30.

“That’s down 8 percent compared to 2016,” said Whitten. “We hit historic highs during the recession, and have seen ridership come back to normal pre-recession levels as unemployment has decreased over recent years.”

The local trend mirrors numbers seen across the country. According to data provided by the Transportation Department, ridership on city buses across the U.S. was down 13 percent in the second quarter of 2017 compared to 2007.

The MTA’s rebranding effort includes replacing the red, white and blue buses currently in use with ones that feature a red and silver color scheme and a new stylized logo for the service.

“It’s striking how much more modern and inviting the new design is,” said Whitten. “The genesis for the idea came in 2012 when we rebranded the then-Downtown Circulator into the Green DASH. Without changing the route or timing, just a new design and image, we saw ridership triple. That was a proof of concept to me as to the power of a brand and an image in attracting customers to our services.”

The new design and logo were developed through a partnership with Manchester Community College (MCC), where two design classes worked on the rebrand last fall as a semester-long project.

“It was a phenomenal partnership as MTA received about two dozen design ideas at no cost to us, the students received real world experience and the winners now have this to add to their portfolios,” said Whitten. “MTA gets a new, modern look; the students get a real-life project to develop their skills, and taxpayers don’t have to spend a nickel.”

MCC Professor Ben Shippee was on hand for the unveiling before an appreciative crowd under sunny skies at the MTA headquarters off Elm Street on Friday afternoon.

He was joined by students Emily Rentz, who designed the new “M” logo, and Thomas Campbell, who created a new “Zip Line” logo for the Route 9 service to Nashua.

Whitten said the market value of the first buses to sport the new look is around $400,000, but the cost to the city was only $38,000 after subtracting for federal grants and other forms of transportation assistance.

The fleet replacement comes as many of the city buses, purchased between 2004-2008, are reaching the end of their 12-year lifespan. The entire fleet is expected to be replaced by 2020, all with the new look.

“It made sense to me that we would incorporate the rebranding into the fleet replacement rather than repainting existing vehicles,” said Whitten. “You’ll continue to see the red, white, and blue livery until those vehicles are retired and replaced with new buses that have the red and silver color scheme.”

Whitten said the main goal behind the rebranding is to illustrate how much the MTA has changed over the years.

“Over the last seven years we’ve added commuter service to Nashua and Concord as well as local routes in Goffstown, Hooksett, and Bedford,” said Whitten. “Transportation needs have changed and today, people need to access the entire region in order to reach employment, health care, school and shopping. We’re redesigning our service to meet that regional need and this rebranding helps to demonstrate that metamorphosis.”