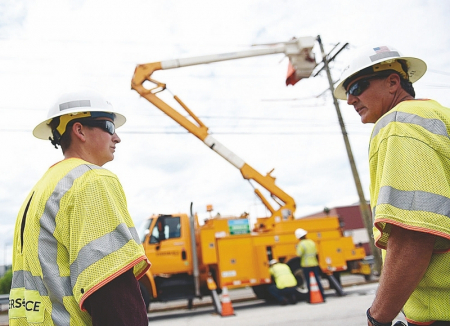 Eversource intern Bailey Dionne, left, works with Outside Supervisor Bruce Lee near a job site at Valley and Wilson streets in Manchester on Tuesday.
Photo by David Lane, Union Leader

Bailey Dionne wasn't asked to climb utility poles this day but instead watched a lineman maneuver a 35-foot hand-held stick from ground level to work on power line equipment hanging along Valley Street.

Not legal to drink yet, Dionne is spending his summer immersed in 120 hours of climbing, learning and observing how to become a utility lineman.

"The more you do it, the easier it gets," Bruce Lee, an Eversouce outside supervisor, advised Dionne.

The Hooksett teen already had experience on using the so-called "extendo stick" during training.

"I was actually the quickest one" among the interns, Dionne said.

Once they complete their fall semester, they can apply to Eversource's 18-month apprenticeship program for the chance to work at an Eversource work center.

"It's likely they'll find a position with us or someone in the trade," said Karl Douglas, New Hampshire manager of regional operations at Eversource.

Eversource employs 180 to 200 line workers in New Hampshire who can earn up to $125,000 or more annually with overtime.

"That's what I'm looking forward to," said Dionne, 19, a Manchester High School Central graduate. "You'll be able to live a comfortable life working as a lineman."

He said some college students get stuck with $100,000 in college debt and end up working in a field they didn't even major in at college. He said he likes the outdoors and didn't want to be "stuck in a cubicle."

Douglas, who's worked for the company for more than 34 years, said not every day is filled with sunshine.

"There will come a time in the middle of the night in a driving rain or ice or a snowstorm, being outside isn't romantic anymore no matter what they're paying you," Douglas said.

The certificate program is a partnership with Eversource, MCC, the National Electrical Contractors Association and the International Brotherhood of Electrical Workers Locals 104 and 1837. The program prepares students for the workforce in a variety of electrical fields but emphasizes electrical lineworker duties and responsibilities.

The paid internships also include training that allows the interns to obtain their commercial driver's license.

"They'll be ready to go once they're hired," Douglas said.

The average age of a New Hampshire lineman at Eversource stands at 49 with retirement eligibility starting at 55.

"In the next five to six years, a lot of the older folks will have the opportunity to leave and will leave the cupboard pretty bare," he said.