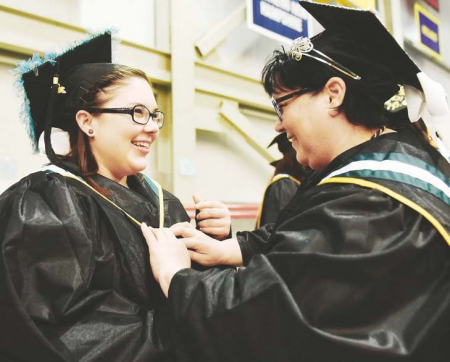 Goffstown - Approximately 325 graduates of Manchester Community College were encouraged to take “measured risks” in life — and not let fear of failure hold them back — during the school’s 71st commencement exercises Wednesday night at Sullivan Arena, on the campus of St. Anselm College in Goffstown.

“The trend is clear, the path toward a bachelor’s degree is increasingly beginning at our doorstep, reflecting the partnerships we have with many universities,” said Susan Huard, president of Manchester Community College. “Today’s graduates who have earned an associate degree have earned an important credential as they begin their next journey — whether that’s to a four-year college or directly into a professional or technical career.”

According to school officials, approximately 325 students received associate degrees from over 30 programs.

Timothy Cunningham a marketing major from Manchester, received the President’s Award, presented to the student with the highest grade-point average in the class. Cunningham finished with a 4.0 GPA, said Huard.

Tracey Riehl, of New Boston, completed her associate of arts in liberal arts/social science and will transfer to UNH-Manchester to study politics and society as part of the NH Dual Admission program. While at MCC, she served as president of the Global Citizens Club and received a Newman Civic Award for her service.

“Along with faith in yourself and in overcoming challenge, it is also important to learn from the process, and recognize the importance of taking measured risks in your life,” said Green. “Every failed experience is one step closer to success. You’ve got to take risks. Every graduate here today has the training and the talent to succeed but you have to push yourself… and you must have the guts to fail.”

Huard said MCC graduates are headed to jobs in a variety of fields, including HVAC, auto technician, advanced manufacturing, nursing and welding.

“This is not the end, but instead it is recognition of accomplishment and the beginning of new chapters for the Class of 2017,” said Huard.

“It’s time for you to write your own history, as part of the Class of 2017,” said Green. “Some of you have achieved the impossible. Some of you have made sacrifices. Some of you took a little longer to get here. Whatever the case, you have completed your mission.”

This article was originally published in the Union Leader on May 25th, 2017. To see the online version of this article, please visit www.unionleader.com's article.