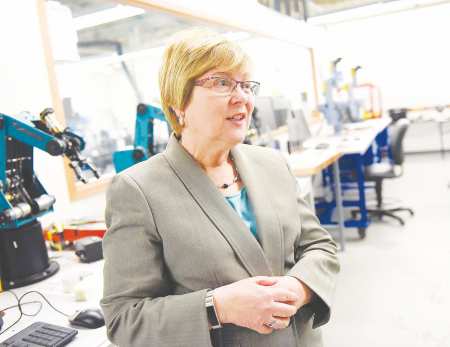 President Susan Huard speaks during a tour of the Robotics and Automation Lab at Manchester Community College on March 29.
Photo by David Lane, Union Leader

Major employers in the Granite State are increasingly collaborating with higher education to increase the supply of workers equipped with the skills needed for advanced manufacturing.

BAE Systems collaborated with Nashua Community College to develop "a microelectronics boot camp," a 10-week course that started in 2016. The first four students to receive the NCC certificate were all offered jobs, said Cindy Harrington, business development manager in the state Division of Economic Development.

In a separate collaboration, GE Aviation expressed a need for trained workers in tube bending to make airplane parts. Manchester Community College worked with GE and three other aviation companies around the state to develop a certificate program.

"They run it as needed based on demand, and they're in touch with all the companies as they go forward," Harrington said in a recent interview. "The companies said their needs have been met at this time and the Manchester Community College will run the program again as needed."

"What we're seeing around the state is collaboration between industry and education," Harrington said.

The Provident Bank agreed to provide $10,000 to Manchester Community College to beef up its advanced manufacturing center. The goal is to make it a clearinghouse where students and companies can turn for information on such things as internships and college programs.

The bank, based in Massachusetts, has its executive offices in Portsmouth and counts many small manufacturers as customers.

"Over and over again, we're hearing that the biggest hurdle that they're facing is finding a qualified workforce, so we really decided to take a leadership role in economic development," bank CEO Dave Mansfield said in a recent interview at MCC.

"In the end, it's all about education and knowledge about where to go for this information," Mansfield said. "Our way of giving back is to strengthen the vitality of the communities through our small businesses and if we can help out with putting a program together and getting that information out, that's what we're trying to do," Mansfield said.

"Younger people may be underemployed, unemployed," said Mansfield, who attended a community college in Seattle before transferring to UMass Boston. "We do have a very low unemployment rate, but I think that masks that a lot of people are stuck in low-wage jobs.

"If they could get through a three- to six-month certificate program, right into a well-paying job with a company that's committed to training them further and real career and growth opportunities, that's the second piece to us that we're real excited about."

Many business leaders across the state have listed finding skilled workers as their top concern, finding it difficult to fill openings in a state boasting one of the nation's lowest unemployment rates.

Mike Power, community outreach administrator at the Department of Resources and Economic Development, said businesses are "going to drive the curriculum. They're driving the need."

The Community College System of New Hampshire serves 28,000 students yearly. More than 90 percent live in the state. More than 200 certificate and degree programs are offered through its seven colleges, five academic centers and online.

"Kids need to see what the possibilities are," Huard said. "I don't know that they thought about how cool it is to weld or (to) program a robot."

Huard said she hopes to offer more courses in advanced manufacturing and has asked in the system capital budget for a few hundred thousand dollars to expand space for its robotics program.

Goffstown resident Karen Keating was driving a bus when she was transferred to a job too far away from home in what she called a "forced quit."

She earned a certificate from MCC in 2014 in a year-long program. The course was more in-depth than the course description.

An executive of Salem's Corfin Industries was on an MCC committee that helped shape the course so "that it would fulfill the manufacturer's needs."

It did. Corfin hired her as a quality engineer.

"I was the oldest student in class," said Keating, who declined to give her age.