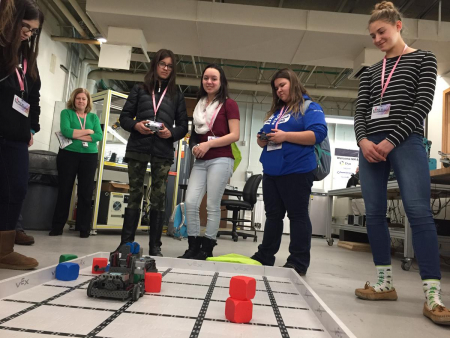 A group of students from Salem High School learn how to maneuver robots during the "Girls in Technology Day" at Manchester Community College.
Photo by Michael Brindley

Click here to view the photo library for this event.

MANCHESTER – The shortage of women pursuing careers in fields like science and engineering continues to be a challenge companies here in the Granite State and across the country.

A study last year found that nationwide, women account for roughly half of the college-educated workforce, but less than a third of those working in science and engineering.

There’s an effort to change that trend in New Hampshire by introducing young women to those fields early on.

Inside the vendor fair, a group of girls are playing Xbox at the Microsoft booth. There’s a bit of a learning curve, so Melissa Dunham, who’s manning the booth, offers some tips.

Dunham works at the Microsoft store at the Rockingham Park Mall in Salem.

“Girls that are coming over that have literally have never played a video game or have played a little bit, are absolutely killing it on this game Rocket League, which is basically soccer but with cars. They’re brutal. They’re just as competitive as the boys are.”

Dunham is here as part of a company-wide initiative to get more young women involved in careers in the fields of science, technology, engineering, and math, or STEM.

“I go to a lot of schools, I work with a lot of groups, I do see how heavily weighted the technology courses and classes tend to be toward younger boys. If I go to teach a class, it will be probably 15 percent girls and the rest will be boys.”

Dunham says being able to recruit at an event like this – where it’s just girls – can help change that.

“You get them interested in the actual gaming aspect and then you tell them, oh hey, you can make this, you can create this. Is that something you’d be interested in? And of course, their eyes get wide, and I can build something like this, my own game, my own characters.”

After, Katie D’Avella, one of the students who was playing the video game, talks about why she wanted to come to the event.

“Really, I just want to show that girls can do things with technology and just show that you don’t have to be a certain gender to branch out into a certain career.”

D’Avella is a freshman at the Manchester School of Technology, and has experience with being told at times she didn’t belong in these fields.

“Just kids around me, guys who were also in robotics telling me I couldn’t do this because I was a girl and I should be painting my nails, brushing my hair, being girly. I feel like some people are just stuck in stereotypes and I want to break that.”

And that’s exactly what the “Girls in Technology Day” program is all about, says Mark McGrath, who works in admissions at Manchester Community College and helped organize the program.

Now in its fifth year, the day includes hands-on workshops for the students.

In the college’s welding lab, as a group of students watch instructors show how to use the equipment.

Dan Chabot is a teacher in the welding program, and says he’s all for anything that gets more young people interested the field, male or female.

“We have such a demand right now. We can’t man the jobs as it is now, so Girls in Technology folks coming here today, it’s a great field and it’s a great opportunity for the young students to come in and get involved.”

In a classroom down the hall, Nicole Phillips is teaching a workshop on app development.

“Today they were able to make an application where you click a button and it’ll say whatever they had typed into the screen. The application takes code blocks in a puzzle piece type of way so that intro kids don’t have to dive right into computer code.”

Along with teaching at the college, Phillips also works as a software engineer for a company in Portsmouth, where she says she’s one of only five female engineers out of a field of 200.

“At first, you’re really intimidated. You think there are just so many men here and you think they’ll treat you different. They really don’t. They’re just like any other person there. I think it’s getting better. We’re hiring more females as we’re going here.”

And while many of the students here say they’re considering careers in STEM fields, others are looking elsewhere.

Saira Jahm is a freshman at Salem High School.

And some of the students say the program shouldn’t necessarily be limited to only girls. Jessica Chasse is a freshman at Salem High.

“I think it’s kind of weird they did it like this. I think they could have mixed it.”

The New Hampshire High Tech Council partners with the state Department of Education and New Hampshire’s community college and university systems to organize the event each year.

And there’s been no shortage of interest.

More than 800 students signed up for the three technology days planned across the state in March.