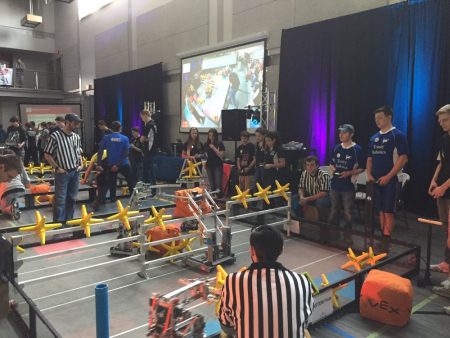 Pinkerton Academy’s 241A won the Design award and Pembroke’s 134 E won the Excellence award, the highest award given to the all-around best VEX Robotics team. All five of these teams earned an invitation to the VEX World Championship to be held in Louisville, Kentucky in April.

Trinity HS team 40B won the Skills Challenge with a score of 112 points, ranking them 9th in the World. The top 50 teams also earn an invitation to the VEX World Championship.

“Manchester Community College has seen the growth and increased interest in robotics engineering programs on a local level and we are thrilled to support our students interest in science, technology, engineering, and mathematics by organizing the VEX Robotics State Championship,” says Dan Larochelle, Advanced Manufacturing and Robotics Professor, at Manchester Community College. “These competitions inspire young minds and expand opportunities for students to explore careers in this field.”

The REC Foundation’s programs are among the largest and fastest growing in the world. Numerous state events will be added in the coming years, offering students more opportunities to compete locally. “Robotics engineering programs naturally engage and inspire students to pursue STEM subjects and careers and we are committed to providing students access to exciting and challenging competition experience, like the VEX IQ Challenge and the VEX Robotics Competition, to accommodate their growing interest,” said Jason Morrella, president of the REC Foundation.

The New Hampshire State Championship was one of a series of VEX IQ Challenges and VEX Robotics Competitions taking place internationally throughout the year. The VEX Competitions are among the world’s fastest growing competitive robotics programs, with more than 16,000 teams from over 40 countries that participate in more than 1,300 competitions worldwide. The competition season culminates each spring, with the VEX Robotics World Championship.

(See the photos at NH1.com)