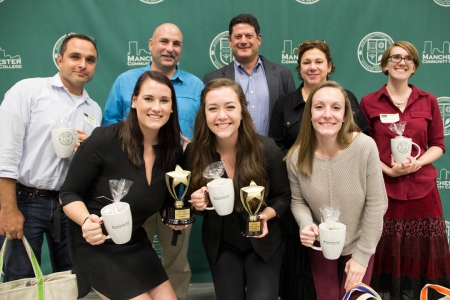 The tension was high, the questions were difficult, and the competition was fierce, but in the end, EVR Advertising defended its Trivia Challenge crown with another win at the second annual Manchester Community College Trivia Challenge on October 6, 2016. Along with bragging rights for the local ad firm, the event raised $16,000 to help fund scholarships.

The trivia night funds will benefit the MCC Scholarship Fund, which provides grants to limit the amount of debt students incur. And apparently, there will have to be a third annual event, given some of the talk between competing companies after the results were announced. “We have several companies that want another shot at the title of Trivia Challenge Champion, and I’m confident we will have a few fresh faces joining the event next year, too,” said Susan Huard, MCC President.

Trivia winners received various prizes, but the real winners are two MCC students: Kellie Boucher, a Business Communications Student from Manchester, and Lacey Fehrenbach, a Liberal Arts/Behavioral Science student from Auburn, NH. They were presented with “Returning Student Scholarships” based on their academic success. (To qualify for these scholarships, students must have earned a GPA of 3.0 or higher their previous semester at MCC and have submitted an essay. Additionally, they must have unmet financial need, but not qualify for Pell grants.)

A full list of sponsors is available at www.mccnh.edu/trivia.