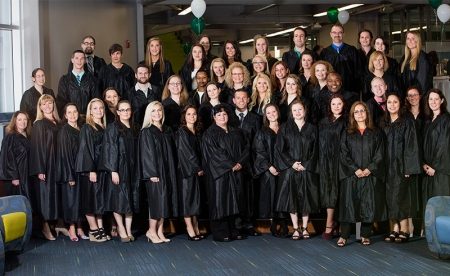 Manchester, NH – On the eve of Manchester Community College’s 70th commencement, the college held its 31st annual Nurse Pinning celebration, Tuesday May 24 at 6pm in the MCC Student Center at 1066 Front Street in Manchester, NH.

More than 60 students were part of the ceremony, which signifies completion of the Associate degree in Nursing. For two of the students, MCC has special significance for their families as well. Kayla Komaridis of Auburn was pinned by her sister Tiffany Alberts, a 2013 MCC nursing graduate who works at Dartmouth Hitchcock Manchester in Internal Medicine. Ashley Remillard of Manchester was pinned by her stepmother, Mary Remillard, who is a 1999 MCC nursing graduate who works at Elliot Hospital as Assistant  Manager of the Emergency Department.

The tradition of nursing pins began in 1855, when Queen Victoria presented a pin to Florence Nightingale in appreciation for her work with the British soldiers during the Crimean War. In the 19th century, many hospitals in the U.S. adopted Nightingale's principles and founded special schools for nursing. Gradually many of the schools were moved to colleges and universities, which then began giving nursing pins to their graduates. The nursing pin of each school of nursing is unique, and only graduates of that school may wear the pin as a statement that they have successfully completed the program.