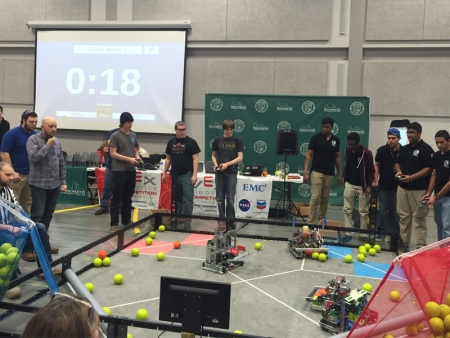 On Saturday January 30, 2016, teams from New Hampshire, Vermont, New York and Massachusetts competed at Manchester Community College in a one-day event designed to test skills for hand-built, student-designed robots. The winning team, "Feel the BERN," comprised of students from University of Vermont and Vermont Technical College will advance to the VEX-U World Championship in April in Louisville, Kentucky.

The robotics challenge called, "Nothing But Net," required robots to gather and then shoot balls into a series of nets to gain points. There was an offensive and defensive strategy to the game and teams competed directly against one another.

"We were proud to host this national competition. This is a terrific program that gets young men and women excited about problem solving, engineering and working together as a team under deadline pressure," explains MCC Advanced Manufacturing and Robotics Professor Dan Larochelle.