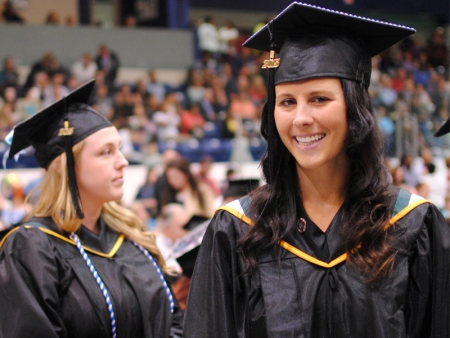 Graduates of the Class of 2015.
Photo by MCC Photography Staff

Manchester Community College (MCC) held its 69th commencement on Wednesday, May 20 at 7pm at Sullivan Arena, Saint Anselm College. Approximately 300 students received their associate degrees from a variety of disciplines – from art and design, business, management and computer science to automotive and welding technologies, education, nursing and liberal arts and sciences.

See the official photos from the graduation.

This year's commencement speaker was Douglas Ligor, Esq. of Bedford, who is Deputy Chief Counsel for the Northeast Law Division of the U.S. Department of Homeland Security, Citizenship and Immigration Services in Lawrence, MA. Ligor is also an adjunct professor at Manchester Community College, where he teaches Political Science and American Government in the evenings. Ligor, who has spent his entire adult life serving his country—first as a cadet at West Point, then as an Army officer, now as an attorney for the federal government, spoke to graduates about leadership and integrity.

Governor Maggie Hassan also addressed the graduates before their degrees were conferred, and shook each and every graduate's hand after they received their diplomas.

We have over 130 official photos available for viewing, downloading, and printing located at our MCC Photo Galleries site.