MCC continues to monitor developments on the spread of the Coronavirus. In response to the COVID-19 health situation, public events previously scheduled to be held at MCC have been cancelled until further notice. The public currently has extremely limited access to the MCC campus and classes are being conducted online (with the majority of our staff working remotely.) Updates from CCSNH are available at https://www.ccsnh.edu/covid-19. Students can find technical support information on the Current Students Resources page.
Menu
Apply Now! 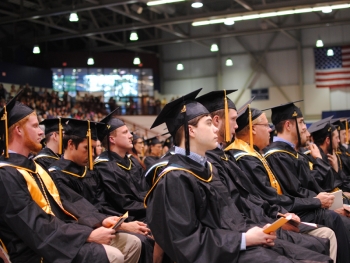 With new degrees in hand, about 300 graduates were urged to seize opportunities in the Granite State during Wednesday's 69th commencement ceremony at Manchester Community College.

See the official photos from the graduation.

"I understand how hard you have all worked to reach this moment," Gov. Maggie Hassan told the Class of 2015 during its graduation event held at St. Anselm College.

The education obtained at Manchester Community College will give each graduate the foundation for incredible success, according to Hassan, who encouraged them to stay in New Hampshire to pursue their careers.

"We need you to lead," said Hassan.

A variety of associate degrees were presented to graduates of all ages on Wednesday, including business management, computer science, automotive, welding, education, nursing and more.

Attorney Douglas Ligor, an adjunct instructor at Manchester Community College, said many of the graduates have accomplished several superman-like challenges to be able to receive their diplomas.

Students had to fight for their educational opportunities often while working full-time jobs or raising families, he said, adding many students will be responsible for paying for their own college education.

"These are no small feats," said Ligor, explaining the ability to reach many of these obstacles makes each graduate strong, unique and ready to be a great leader.

By earning their powerful new knowledge and securing a spot during Wednesday's commencement exercises, Ligor invited the graduates to lead not only in their own communities, but in the country.

It is time for the Class of 2015 to set an example, lead with integrity and "choose the harder right over the easier wrong," encouraged Ligor. He said there will be temptations, haters and critics who will test the future leaders, but Ligor urged them to continue on and get back up if they stumble.

"You are a courageous and wonderful bunch of people. The institution is richer because you came," said Dr. Susan Huard, president of the college. "We will miss you."

Vicki Carter of the school's management degree program received the President's Award, which is presented to the student with the highest grade-point average. Carter, of Londonderry, obtained a 4.0 GPA.

Adam Moy was given the Student Trustee Award for his involvement in the school and his dedication to the student body.

Dr. Ross Gittell, chancellor of the Community College System of New Hampshire, encouraged the new graduates to recognize their own achievements and think about their future aspirations while understanding that their new education will help them achieve their goals.

"We are humbled by your commitment and your ambition," echoed Paul Holloway, chairman of the board of trustees for the Community College System of New Hampshire.

An honorary degree was awarded to Mary Tebo Davis, a natural resources field specialist for the University of New Hampshire Cooperative Extension. She has been instrumental in developing several community gardens in Manchester and on the school campus.

We have over 130 official photos available for viewing, downloading, and printing located at our MCC Photo Galleries site.