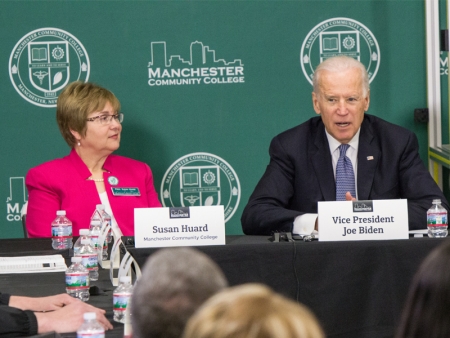 It's not enough time in the public educational trenches to prepare young Americans for the real world of careers and self-sufficiency, says Biden. Extending free education beyond high school, to include two years of community college, is necessary in these technological times, and is the right economic move forward.

"We find ourselves in a position that if we have the best trained workforce in the world, we're poised to lead the 21st Century like we did the 20th Century — but we need the best educated public in the world," says Biden.

Biden hit the ground running Wednesday afternoon with his opening remarks during a stop at Manchester Community College, there to tout a federal conditional initiative that would support free community college tuition.

He didn't lose any ground, either, as he moved through a series of related topics, including the need for a competitive edge and affordable options within secondary education.

The need is great, and businesses across the country are facing a future without enough qualified workers, says Biden. And this is all happening at a time when the trend toward outsourcing seems to be moving in reverse, says Biden.

To support that point Biden provided an anecdote about a Boston survey-taker that polls companies with investments in China, asking each year what their plans are for the coming year.

"This year, 54 percent of CEOS said they're planning on coming home," says Biden.

He also mentioned an eight-month study done by the White House polling Fortune 500 companies to learn what jobs are needed in "the near term."

"There are 100,000 skilled manufacturing jobs going unfilled right now. We find ourselves in the position of needing 635,000 registered nurses by 2022 — and the list goes on and on," says Biden.

Biden and his wife, Dr. Jill Biden — who teaches at Northern Virginia Community College – have for years been beating the drum for community college as the pathway for work for U.S. jobs in the near and distant future, says Biden.

Now is the time to get the band together, so to speak — formulating a supergroup consisting of community colleges and New Hampshire's leaders of industry to play us into the future with a renewed sense of economic strength.

He said he firmly believes public/private partnerships are the single-best way to help solve the higher education puzzle in the United States.

Rebecca Cantwell, an MCC welding student in a two-year degree program, was one of those invited to the table to talk with Biden. She said she came to Manchester Community College because it was closer and more affordable than other local schools.

She chose welding because it seemed interesting, and she would like to find a job in construction when she graduates.

Jeremy Jones, a Manchester Community College student and single dad, told his story to Biden. After a previous career in the commercial printing business dried up, Jones found himself unemployed and at loose ends.

"I was being told I was either overqualified for junior level work or underqualified for management positions, without a college degree," says Jones.

His sister encouraged him to make good use of his downtime and "get it done."

"Within five days I was a student. It was a whirlwind process, but I'm loving it," said Jones.

He says he's now seeing the process of higher education through two lenses — as a student with access to program offerings that can change the course of his life, and as an employer, understanding how targeted majors can turn out high-quality workers, ready for hire, and feed the need for skilled workers.

Fellow student Chris Scales, a senior at MCC and also a Coast Guard veteran, said he's learned to use various high-tech tools of the trade in the two-year welding program. Going forward, he hopes to take advantage of the business partnerships MCC has forged with local industries looking for skilled workers in his field.

His ultimate goal is to start his own welding company one day.

Biden has been taking the White House message of "free and universal" community college education on the road with a series of stops at schools around the country, including Wednesday's roundtable in Manchester.

Along the way he's been reinforcing the words uttered during Obama's 2015 State of the Union address, when the President vowed to work with Congress to reduce the burden of monthly student loan payments for those already feeling the weight of education debt.

"It's about growing the middle-class economy back," says Biden.

After the session ended, MCC President Susan Huard said Biden's visit provided a "tremendous and intense" opportunity to showcase how the community college is aligned with the state's economic future through relevant job creation.

She said she had less than a week to prepare, but in the end, all went smoothly.

"Most of all this was a chance to showcase what we do and really help the people of New Hampshire to know what it means to be a comprehensive community college," says Huard.

For years the college's reputation has been limited by the notion that it's "just a technical college."

"We're proud of the technical programming we do, but we also do a multitude of transfer and business degrees. This was a great opportunity not just for us, but for the other six community colleges in the state, to get that message out," says Huard.

Prior to the roundtable panel, Biden toured several departments at MCC, including welding, robotics and advanced manufacturing, known as Mechantronics.

Obama's proposed community college plan is projected to save the average full-time community college student an average of $3,800 in tuition per year and help an estimated 9 million students annually, at a projected cost of $60 billion over the next 10 years. Participating states would contribute $20 billion toward the cost.

In return, enrolled students must maintain a minimum 2.5 GPA, and colleges would be required to offer programs that would transfer to four-year colleges and universities or offer training for in-demand careers.