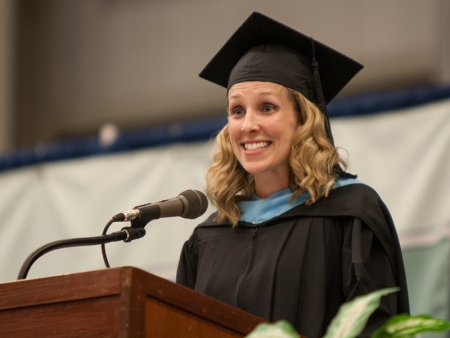 A diverse group of graduates, ranging in age from early 20s to 60-somethings — many the first college graduates in their families — along with having worked while earning their degrees, filled the Sullivan Arena at St. Anselm College for the ceremony.

Commencement speaker Kendra Tisbert, a Class of 2000 MCC graduate, shared her struggles with this year's graduates about how she earned her MCC degree and went on to earn advanced degrees and establish a career as a preschool teacher and case manager for special needs children.

"It's tough to explain how much I owe to MCC, but there is a piece of MCC in my heart forever," Tisbert said. "I believe MCC is a true start for a life change."

An honorary degree was presented to Andy Crews, president and CEO of AutoFair Companies and chair of the New Hampshire Automobile Dealers Association for his business leadership and his commitment to educating people in the automotive technician field.

One of the first graduates for the building technology and construction class, Marc Dager handed the diploma to his son, Andrew, who was graduating this year from the same program. Marc Dager graduated from MCC's program in 1976. Adam Moy was presented the President's award for earning the highest grade point average in the class. After the ceremony, graduates celebrated with selfies and hugs.

"It feels great to graduate," said Chad London. "I'm just soaking this up, then moving on to (earning my) bachelor's in computer science."

We have over 100 photos available for viewing, downloading, and printing located at our MCC Photo Galleries site.