With Hammer and Nail, Merrimack Teen Builds Her Future 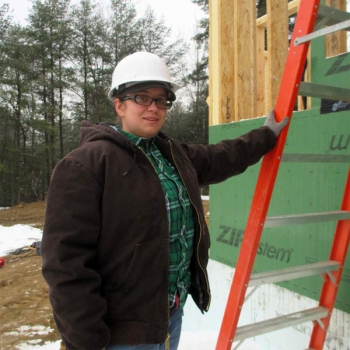 She has volunteered extensively with Habitat for Humanity and is one of two women who are seniors in the Building Construction Technology program at Manchester Community College. She has taken an accelerated course load so she can graduate this spring, and already has a plan in place to open her own construction business. Oh, and she turned 19 on Jan. 10.

She is one of 26 MCC students – 22 men and 4 women – building a house on Straw Road in Manchester, the result of a unique partnership between the school, St. Mary's Bank, Milford Lumber and Duffley Development Corp.

Stephen and Christine Duffley have lived on Straw Road for more than 10 years on land that was originally part of the historic Straw Farm.

While watching their children play basketball three years ago, Stephen Duffley and David Fischer, MCC building construction technology professor, began discussing the idea of collaborating on a project. It took a lot of planning, but they received approval to allow MCC students to begin construction of an eight-home subdivision on their land. They welcomed the chance to have new neighbors while providing the experience for the students.

The students are divided into two groups, and each group spends time in classes and one full day – 8 a.m.-3 p.m. – working on the site under the supervision of their professors. The students will build the frame and roof of the house. Duffley Development will complete the interior finish work, including electrical and plumbing, and then each house will be sold on the open market. Because the Duffleys will retain ownership of the land until the houses are completed and sold, and the student labor is part of their curriculum and unpaid, costs have been minimal.

"The students can take what they learn in the classroom and come out in real-life, on-site trade experience," Fischer said.

Since September, students have worked in 95 degree days and in temperatures below zero.

The house currently under construction is a 1¾-story cape with three bedrooms and about 2,500 square feet of living space plus a full basement. It was designed to be energy efficient, with Milford Lumber supplying the materials.

"Within a year, if the economy works with us, we will have a buyer for this one," Fischer said. "We'd like to sell the previous house before we start a new one."

"It's a package deal, as if we built it ourselves, but we're allowing the college to build it," Christine Duffley said. "The buyers are lucky because we want to price it right. It's a good collaboration and everybody will win. We hope to send money back to the school and the value of donated materials."

"This is what community college is all about," she said. "Providing partnerships with the local community so the students can be successful."

Smith became interested in architecture and construction at a young age: her grandmother, Bonny Smith, ran CAD Smith Studios, designing and selling blueprints over the Internet, for more than 20 years.

"I always loved throwing things together," Smith said. "My grandmother was an architect/designer so I grew up with design and shipping prints. I like to build and I like fiddling with design on the computer."

The family hoped that Smith would eventually take over CAD Smith Studios, but after several bouts of cancer, her grandmother died last summer, and the business has become dormant.

"She was very influential to Shea and that's why she really got involved in building," said Shea Smith's mother Ishanna Smith. "She was a strong woman."

Shea Smith attended public school in Merrimack through the end of middle school and was then home-schooled.

As soon as she was old enough, in addition to helping with her grandmother's business, she began volunteering for Habitat for Humanity. Among the projects she worked on is a three-story multi-family house on Hosley Street in Manchester that remained vacant after a fire several years ago until the city sold it to Habitat.

Smith also worked on a two-bay garage near the south end of Elm Street in Manchester, which was turned into a facility for homeless veterans and has helped build parade floats.

Last year, she and her friend Kate Poirier were honored as recipients of the President's Service Award for the more than 200 hours they each have volunteered for Habitat for Humanity. Poirier is a 2013 graduate of Merrimack High School and is studying Environmental Science at Plymouth State College. The two received their certificates, signed by President Barack Obama, at the organization's annual dinner.

After completing high school, Smith enrolled at MCC and has taken courses throughout the summer so she could finish her associate degree this spring. She has her own tool belt and various tools, but said she appreciates having access to larger, more expensive tools like circular saws owned by the school.

Once she completes her degree, Smith hopes to open her own business building and selling tiny houses. The tiny house movement began out west in Colorado and Arizona, and involves drastically downsizing and eliminating non-essentials.

"You use an 8 by 18 flatbed trailer as a foundation, build a house on it and just park it," Smith explained. "It's about living within your means."

The houses are called Tumbleweeds, because they have roots but are still mobile. They use two-by-four construction, are heated and insulated, and are typically one bedroom with a twin bed or a loft for a queen-sized bed. The trailer-based houses range from 117 to 172 square feet, with stationary cottages ranging from 261 to 884 square feet.

Design plans for the houses are available at tumbleweedhouses.com, and customers can purchase just the plans, the plans and a complete kit to assemble, or a home that's already built.

Although she hasn't yet built a Tumbleweed, Smith has already purchased the plans for the 8x18 foot Cypress model, and is saving money to buy the building materials.

"I want to build one to live in first," she said. "Then I can show people how big it is. People hear it's 8 by 18 and think it's a closet, but once you get inside, it is actually a comfortable size."

This article was originally copied from the Nashua Telegraph, but has since been taken down.