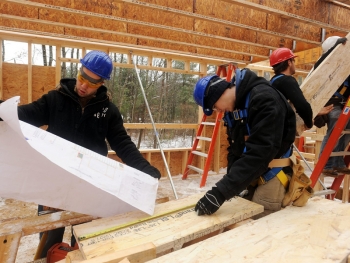 Fischer, an MCC professor of building construction technology, asked Duffley if he wanted to buy one of the 1,000-square-foot modular homes his students had built at the Front Street campus.

Duffley, who has known Fischer since the two were student teachers in 1982 at the Manchester School of Technology, told him he didn't. But he suggested MCC partner with him in building some homes on property he owns on Straw Road, not far from the Goffstown town line.

In September, after all the city permits were obtained and a subdivision approved, that partnership began when 26 students — 22 men and four women — began building a two-story, three-bedroom 2,500-square-foot New Englander.

"Hopefully, this is the first of eight houses," said Duffley, as the students worked Tuesday on framing the single-family, high-energy efficient home. He and his workers will do the finish work.

The homes are being built with the newest techniques in the industry. For instance, the foundation features insulated concrete forms with an R-50 insulation value. The house will include an air-exchange system, two full bathrooms on the second floor, a half-bath on the first floor and a finished basement plumbed for another bathroom.

Three professors and managers from Duffley Development Corp. oversee the construction daily to ensure the work is properly done.

"Last year, we did mock-ups inside in about a 6-by-6-foot room," said senior Andrew Dager, who is following in the footsteps of his father, a graduate of New Hampshire Vocational Technical College (now MCC). "This is much better. You get to build a house, and it's much more hands on. I've learned a lot more this year."

Students were surveying the property the very first week of school, he said.

The students are building three energy-efficient houses in the first phase of the development. Ultimately, the development will be feature eight homes.

Duffley said working with the students was beneficial for him. He did not want to build a home on spec and hope someone buys it during trying economic times. Having students doing some of the work reduced labor costs.

He expects the two-story house, which sits on an acre and abuts Black Brook, will sell for about $275,000. MCC, he said, will be reimbursed for donated supplies and any costs it incurred. He also hopes to give money back to the program.

Duffley has worked with the inexperienced before as a volunteer with Eight Days of Hope, a Christian disaster recovery organization founded after Hurricane Katrina to help disaster victims rebuild their homes.

"This is a terrific, win-win situation," said MCC President Susan Huard in a prepared statement. "Our students get on-site, hands-on practical construction experience that they can turn into a job after college. And the construction company gets a ready-made volunteer workforce — supervised by experts in the field — which helps keep costs down and allows the company to pump the savings into new energy-efficient technologies."

Fischer said the recession halted the college's ability to work with a contractor to provide the students with real-world experience.

"Nothing can replace the type of experience this provides," he said. "It is terrific to be able to restart this valuable learning experience."