The Evolution of Manchester Community College 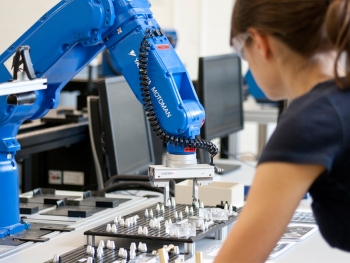 Tom Rolfe, of Temple, installed piping systems for 30 years and knew how to read blueprints, but he lacked the high-tech background in demand today. So when he was laid off in 2011, he took a computer-aided design certificate program at Manchester Community College (MCC). Before he finished, he was hired by American Refrigeration Company Inc. in Andover, Mass. as an Auto-CAD drafter with prospects to advance to project manager.

The $500,000 advanced manufacturing lab where Rolfe honed his trade is part of a multimillion-dollar investment the college made in buildings and new programs over the past few years. The goal was to offer training in skills employers say are in demand, including high-tech manufacturing, health care and automotive technology.

"New Hampshire is beginning to understand the notion of a comprehensive community college," says MCC President Susan Huard. And while she likes to highlight the advanced manufacturing program, she points out that 40 percent of MCC's students are pursuing liberal arts.

At the forefront of the school's mission, Huard says, is "all the work we're doing partnering with industry and creating what I'll call seamless pathways," which take students from high school to a community college and possibly then a four-year college, or from a community college directly into the workforce. "But industry is in there as a partner and they're at the center in the work that we're doing," Huard says.

The college is also looking to help adults achieve "stackable credentials," a term Huard says the federal government applies to the shorter-term credentials that middle-income students can acquire to meet industry needs. For example, a high school graduate might start an entry-level job while taking community college courses, gain new skills and get a promotion. That student could later return to school to build on those competencies, and students set their own timeframe, balancing school, work and family.

In 2008, enrollment at MCC spiked by 14 percent and kept climbing until 2011 when registrations reached a plateau. With state funding cuts and the elimination of a state scholarship program, some students found the relatively lower cost of community college still out of reach. Many full-time students dropped to part time, while some part-time students dropped out. In the last academic year, more than 6,500 students took classes, about a quarter of them full-time.

"The [advanced manufacturing] lab is an impressive small version of what an automated production line will be," says Wayne MacLeay, director of operations with Degree Controls, a provider of electronic cooling systems in Milford. As an advisory board member, he emphasized the importance of hands-on learning and recommended switching to more commonly used design tools, such as Pro E and Solidworks.

Ken Swanson, another advisory board member and director of engineering at Fireye in Derry, agreed students should know Solidworks, which Fireye uses to design and evaluate parts. He was also a proponent for teaching 3D modeling concepts and advised the school on purchasing 3D printers.

MacLeay says the advisory board designed the program to combine a "mix of older information—the ability to read a blueprint—with [instruction on] how to automate the process so you don't have to have a person standing there running the equipment."

MacLeay says students are trained at modular stations and learn how to manipulate the robots and other technology so products move from design through manufacturing and packaging and into the customers' hands.

For Rolfe, the certificate program was a ticket out of unemployment. "I wouldn't have gotten the job without the certificate," he says, adding it opened his eyes to the possibility of earning a higher degree.

College officials say they anticipate manufacturing technologies to grow at approximately two to five percent through 2018. Using the latest figures from the America Job Center Network, electrical and electronics-engineering technicians in New Hampshire can expect to earn a median annual salary of $53,800; and robotics technicians, $64,600.

And while the employment outlook hasn't regained its pre-recession muscle, the New Hampshire Center for Public Policy Studies reports that when measured by salaries, the smart manufacturing and high technology sector remains the largest single sector of the NH economy, with employees receiving 18 percent of the $37 billion of total employee compensation paid in the state.

The college, which is fine-tuning its mechatronics and CAD programs, is looking to fill the smart manufacturing program's 47 seats by the fall semester, project coordinator Philip J. Przybyszewski says. In June, the college was already halfway to that goal.

Freudenberg North America, a Granite State manufacturer with seven industrial facilities and 1,300 NH employees, is keeping an eye on MCC. North America president and regional representative Leesa Smith says: "We are hoping to welcome the first interns from the Advanced Manufacturing Technology program in the near future and to have some of the first hires."

While NH expects to add 20,000 healthcare jobs by 2018, those professionals must be trained and MCC is ready with $4.9 million in federal funding for those jobs and health information management. In addition, there are six hospitals partnering with MCC to educate existing workers and train unemployed, underemployed, and dislocated workers.

Since the grant's inception in 2011, 106 workers have enrolled, of which 86 are in an allied health program. Though all funding comes through MCC, some students take courses at other NH community colleges.

In the Driver's Seat 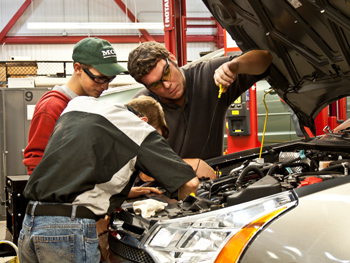 The year-old 30,000-square-foot automobile technology center includes four drive-in classrooms. "We can demonstrate things on the car right in the classroom that we couldn't do before," says Marc Bellerose, chair of the program. "Or we can link the car through our computer network, and we can view what's going on in our car to a screen on wall."

Two new labs are designed to mimic a service dealership, with extra width for safety and training purposes. And Bellerose says the curriculum is under review, as the technology in cars is advancing very rapidly. A typical car with touchscreen displays will use multiple computer networks to control everything from transmissions and climate control, to tire monitoring and air bags.

And while cutting-edge cars are more reliable, service technicians require a more complex understanding of how they operate, or how they run with alternative fuel technologies. Bellerose says he expects to continue to expand the program, as he adds new partnerships with car manufacturers in addition to his existing relationships with Ford, Chrysler and Toyota. 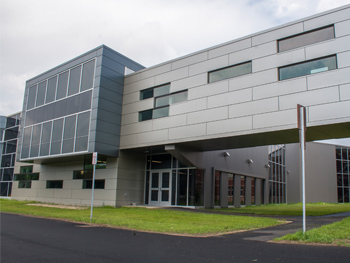 While people driving by on Route 293 used to mistake MCC for an elementary school because of its early childhood center playground, Huard says, "you would recognize us now."

Facing the highway is a modern $6 million glass and steel student center, which houses a fitness center, new dining hall, and offices for alumni, student senate and campus activity boards, as well as assembly space for 200 people.

Huard says with student ages dropping from 28 to 25, the need for such a space has grown. "Younger students are on campus for much more of the day," says Huard.

College officials say they are on strong path for 2013-14 with double-digit growth for summer compared to last year as of July, and a seven percent increase for fall.

The new student center, increased collaborations with industry and investments in buildings and programs are all part of the college's evolution from a commuter campus for older students who drop in and out for a technical degree to a full-service campus serving the high-tech needs of today's employers.

"Despite everything that's going on," says Huard, "the group with the lowest level of unemployment are college graduates. So people still value the college credentials."