WorkReadyNH Helps People Develop Skills Needed to Get a Job 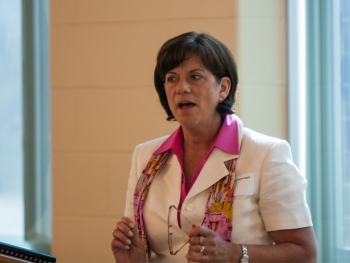 Donna Pettengill of New Boston was unsure of herself and her skills after being laid off in March 2012 from Cobham, a defense contractor where she was a configuration manufacturing specialist.

Newly unemployed, Pettengill felt she had no skills to get another job because her employment had been in such a specialized field, and she thought she had nothing to offer the community.

"I had low self-worth," she told the dozens of people gathered Tuesday at Manchester Community College for the annual WorkReadyNH Business Breakfast.

At the unemployment office, she learned of the free WorkReadyNH program geared to the unemployed, underemployed and veterans. At first, she was hesitant, especially when she learned a doctor went through the program and hadn't obtained the National Career Readiness Certificate (NCRC) awarded at the end of the program after passing an exam.

"I thought, 'Oh, no,'" she said. But Pettengill persevered, even though her math skills were weak, ranking at the third-grade level.

The program became her full-time job, so to speak, and at the end of it she earned her certificate with a gold ranking, one below the top Platinum which, so far, has been attained by only one of the 189 program graduates.

She said without that certificate, she never would have been hired by the another company in a higher classification than her prior job, or had the confidence to continue her education, enrolling in an associate degree in management program at the college.

The event opened with remarks from Gov. Maggie Hassan, who noted she launched her campaign for governor at the campus.

"All Granite Staters, regardless of circumstance, should have the opportunity to hold a good job, work hard, raise a family and share in the high quality of life we enjoy in New Hampshire," she said. "When they do, they become empowered, and our state grows stronger. And WorkReadyNH is an important part of our efforts to help our people achieve the goal."

She said the program is a critical initiative that, combined with other state job programs, is "strengthening our workforce, supporting growing businesses and helping us build a more innovative economic future."

The program is grounded in the WorkKeys National Career Readiness Certificate (NCRC) issued by ACT, the national college admissions test similar to the SAT.

The program first assesses a participant's skills in applied math, reading for information and critical thinking. Based on test results, lessons are assigned online and are completed at the participant's pace.

Leesa A. Smith, president/regional representative of North America for Freudenberg, a German family-owned company with total global sales of $6.5 billion, was among business leaders attending the breakfast. She said of interest and of importance to her company is the NCRC certificate.

Naomi Godfrey, regional human resources manager for Klüber Lubrication in Londonderry, one of Freudenberg's companies, said Klüber is interested in recruiting people with the certificate, but also is looking into having some of its employees take the classes

Since the program began two years ago, 189 people, ages 18 to 82, have graduated. Of those, 75 percent had been unemployed and 25 percent, underemployed.