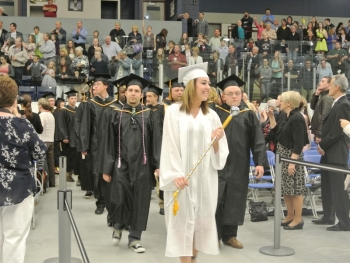 Posted: May 23, 2013
by Kathy Remillard, Special to the Union Leader

MCC President Dr. Susan Huard recognized a mix of students who earned their degrees while juggling other commitments, including those who held down day jobs while working toward their degrees, veterans and those in active service, and students balancing school with family life.

Nickolas Yastek, Senior Class Representative and recipient of the College Service Award, asked students to recognize those who supported them along the way, and said students made it to their big day through perseverance and determination.

"We have all found a nurturing home as well as a leg up here at MCC," he said. "I believe we are better people today than we were when we began this journey."

Paul Holloway, a trustee of the Community College System of New Hampshire, urged students to get involved in their communities.

"Speak your minds — don't be afraid to offer your opinion," he said.

Holloway reminded students to thank those who supported their educational goals.

"Thank you — they're very important words, and they mean a lot to the people who hear them," he added.

Commencement Speaker Ron Pinard, an alumnus of the MCC Class of 1970, described his humble beginnings as he earned his associate degree in Electro Mechanical Design from the school then known as the New Hampshire Vocational Technical College, followed by a career at such companies as Raytheon, Digital and Intel before co-founding a nanotechnology company in Princeton, N.J.

When that company, NanoOpto, was sold in 2007, it had 48 employees and 7 patents, including those for Blu-Ray, the infrared cut filters used in the cameras of most cell phones, 3D optics for movies used by Dolby and other filmmakers, and, most recently, the optics for the new iPad.

Pinard said he never would have met his career goals if he hadn't stepped out of his comfort zone.

He urged students not to be complacent, to seek opportunity and to learn as much as they can.

"Start here, and go far," he said. "Destiny is not by chance, but by choice."