Home / MCC News Archive / An Education for Everyone

An Education for Everyone 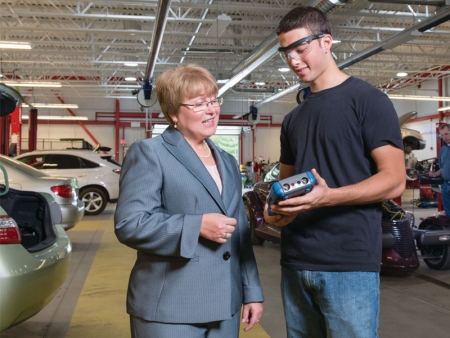 It's the near-palpable energy that strikes you first when stepping onto the campus of Manchester Community College (MCC) – the sense of potential and possibility in the air. On the warm September morning that marked the beginning of the fall semester, faculty and students alike hurry down bustling hallways, carrying book bags to their first classes, the same excitement and enthusiasm lighting the faces of young and old, returning students and new enrollees. Their President, Susan Huard, walks these same halls, and she sees it, too.

"It's a great time to be here," Huard says. "I look around and I see the students – their heads are up, there's purpose in their stride. I admire them. There's an amazing range of things going on."

She's right – there are significant changes afoot at MCC, both figuratively and literally. This year, you're almost as likely to run into a construction worker with a hard hat and a tool belt as a student study group or a faculty advisor. Several massive projects are under way now, and as a result construction equipment is scattered at locations across campus, and various areas are roped off for crews of workers. As President, Huard is more conscious of this hustle and bustle of campus than most anyone, and though she may not have totally grown accustomed to it, she's excited about what it means is on the way.

"This is the college's time," she says. Huard says this plainly, confidently. She's not making a pitch – she's giving you the simple truth of the matter. Given the scope of projects on the docket at MCC, it's becoming increasingly difficult to argue. The initiatives in question aim to address the various elements that shape a well-rounded collegiate experience, from academics to a student's personal life or connection to his or her community.

On the academic side, MCC is, for instance, adding over 8,000 square feet of space to create four classrooms for its Automotive Technology Program, as well as modernizing and expanding its Welding Program. The college also aims to student life through additional space geared toward student gatherings and activities; a two-story, 26,000+ square foot addition to the main MCC building that will act as a student center is scheduled to open in spring.

It's thrilling for Huard to see these changes taking place, but it's perhaps even more exciting for her to witness the expansion of the type of student that populates MCC. Public perception of the value of time spent at MCC is improving, too, as more families and students become cognizant both of the challenging cost realities of other post-secondary educational options and the continuing instability of the employment market. Huard also believes the flexibility attending MCC provides is not well known enough.

"I think there's a persistent myth that people come [to MCC], get their degree, and that's it," Huard says. That's not nearly always the case, she explains. "Many of our students start here and go on when they're ready, and complete their BA; some move on to careers in particular trades. Others take different routes, and that's all fine with us." The point is, Huard explains, that the community college works to enable a flexible path for students of various backgrounds and circumstances – the school's motto is "Start here, go far." Given the range of options MCC facilitates, you'd have to say the line fits.

Huard believes the public has only recently begun to understand the value of an associate degree. As they do, the range of students that attend the college is expanding. MCC, Huard tells us, currently enrolls students as young as 15 and as old as 75. Their circumstances and goals are similarly disparate. Two thirds of MCC's students are part-time students, and by Huard's estimation, between 75% to 80% of the student body is working while attending school. They hail from 11 states and 50 different countries. While large percentages of students' degrees are split between disciplines that may traditionally be considered unsurprising, with 19% in Business, 19% in Technical Programs, and 14% in Health Care, some observers may be surprised that the leading percentage of students derive their degrees within Liberal Arts, at 34%.

It's difficult to imagine a unified student body arising from a group of people with such potentially different goals and backgrounds. Huard doesn't see it that way; she sees a group of people, young and old, with the same commitment to working hard to improve themselves. At Manchester Community College, that diligence and enthusiasm about education is all you need to fit in. Huard explains:

"We want to be their place of choice to learn – whatever that might mean, whatever their path might be," Huard says. As the President, she's tasked with taking the helm of the university, and steering its future course. She recognizes the energy in the air, too, and for now and going forward, Susan Huard will look to give that sense of possibility a chance to become reality. "There's a path for everyone here."