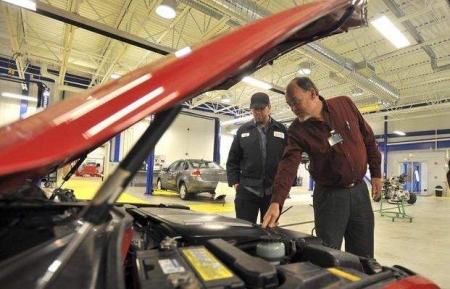 Professor Peter Ashworth, right, and alumnus Greg Landry examine a 2002 Lexus SC 430 during the opening of the first phase of the automotive technology training center at Manchester Community College.
Photo by Bruce Preston

If manufacturing in New Hampshire was a person, it could safely say, "Tales of my death have been greatly exaggerated," with apologies to Mark Twain.

Despite all the hand-wringing about the loss of manufacturing jobs to China and India, there are plenty of places in the Granite State where employees still "make things," as they have since the 19th century, when the state's rivers and mills fueled the Industrial Revolution.

But the type of manufacturing is changing, from repetitive, unskilled assembly-line work — that is gone off-shore and not coming back — to what educators and business leaders call "advanced manufacturing," with well-trained employees using high-tech equipment to produce components or finished products for aerospace, biotech or information technology.

Across the nation, states are racing to align their educational offerings with the needs of those industries in the hope of becoming the manufacturing hubs of the future. In New Hampshire, such efforts have been well under way for the past three years, and are accelerating this year with federal assistance and new state initiatives.

In July, the state's Community College System was awarded a $19.9 million grant through the U.S. Department of Labor, Employment and Training Division to develop and deliver job training programs in cooperation with employers in the advanced manufacturing sectors.

The Advanced Manufacturing Initiative, as it's called, will be run from each of the seven community colleges, located in Portsmouth, Nashua, Manchester, Concord, Claremont, Laconia and Berlin.

In May, representatives of the University System of New Hampshire and the Community College System signed a letter of commitment outlining steps they'll take to increase the number of graduates with degrees in science, technology, engineering and math, so-called STEM degrees.

The goal is a 50-percent increase in the number of STEM graduates by 2020, and a 100 percent increase by 2025. In announcing the program, educators pointed out that New Hampshire consistently ranks among the top 10 states in the percentages of adults with associate, bachelor and graduate degrees, but is not as strong in science and technology. The state has historically relied on the in-migration of highly educated workers, a trend that demographers say simply cannot be sustained.

"We're focused on the alignment of our education and training programs with the needs of industry right now," said Ross Gittell, chancellor of the Community College System of New Hampshire, "and working with industry to identify their needs over the next decade or two, because we want our students to have the skills necessary for the future economy, and to have a path to well-paying jobs."

Gittell made that comment at an economic forecast luncheon last week hosted by the Manchester Chamber of Commerce. At the same event, Dennis Delay, an economist with the New Hampshire Center for Public Policy Studies, pointed out that one out of every three community college graduates is graduating with a STEM degree, and is "graduating with a career path that will lead to fairly high earnings."

The community colleges are where the action is right now when it comes to skills training that leads to immediate, well-paying employment. Only one out of five bachelor's degree graduates in the state has a STEM degree, and the ratio is even lower among those with graduate-level diplomas, Delay pointed out. Oddly enough, your chances for a good job in New Hampshire seem to go in inverse proportion to the amount of money spent on your education.

The trend is changing, but perceptions of education built up over generations will not be easily reversed. As a reporter writing on the trend for Bloomberg News Service noted, "There's a challenge in convincing educators and parents that the slow-growth manufacturing sector is a smart bet for young people who've been told since birth that a four-year college degree is the safest path into the middle class."

It's never been a secret that college graduates with degrees in science, technology and engineering have better job prospects than liberal arts graduates, even in the best of times. But not everyone is cut out for the academic rigors of an undergraduate or graduate degree in chemistry or engineering.

That's where the community colleges come in, offering two-year certificate or associate degree programs focused on specific industries ready to hire after graduation. If purists want to call that job-training, instead of education, educators like Gittell make no apologies.

"We have to get the word out to students and their parents that not only education matters, but what you study matters," he said.

The relationship between the state's community colleges and the advanced manufacturing employers gets a lot of attention these days. Each skills program at each college has an industry advisory board. The community college system regularly surveys employers as to their training needs. Gittell pointed out that the system is now partnering with the state's High-Tech Council on a survey of 200 high-tech companies, and just completed an online survey in collaboration with the New Hampshire Hospital Association. "We're using that to guide our educational programming," he said.

The employers, for the most part, have been responsive, with some launching initiatives of their own. BAE Systems in Nashua pays high school guidance counselors to take jobs with BAE over the summer as part of an effort to change the cultural myths surrounding manufacturing.

The future of advanced manufacturing in the state will be the focus of the 10th annual Governor's Advanced Manufacturing and High Technology Summit on Oct. 11 at the Center of New Hampshire in Manchester. Among the sponsors is the state's Manufacturing Extension Partnership, whose many programs include outreach to academia.

Lonza Biologics at the Pease International Tradeport has experience in that kind of outreach with Great Bay Community College, helping to create a two-year, biotech associate degree program.

"The college is now looking to develop an apprenticeship program for GBCC students at Lonza, a co-op that would add a train-in-place element to the associate program, creating a more direct talent pipeline for the company and a more direct career pathway for our students," said Shannon Reid, director of communications for the community college system.

Cooperative programs with industry are either in place or in development throughout the state. Examples include a program for radiation technicians at NHTI in Concord; a certificate program in advanced machine tool technology at River Valley Community College in Claremont; a health information management associate degree and medical coding certificate program at Manchester Community College; and manufacturer-specific automotive technology programs affiliated with Honda/Accura in Nashua, and General Motors in the Lakes Region.

These efforts in New Hampshire and nationwide are being funded in part by a federal initiative announced in February. The $8 billion "Community College to Career Fund" aims to "help create an economy built to last by training 2 million workers with skills that will lead directly to a job," according to the White House.

With student loan debt at record levels, and 19 percent of college graduates either out of work or underemployed, the stage is set for a major change in what post-secondary education means in America.

"I think a lot of our students are more focused on careers and getting jobs, and they're really focused on how to get make the best of their college experience," Gittell said. "We're organized to do that."