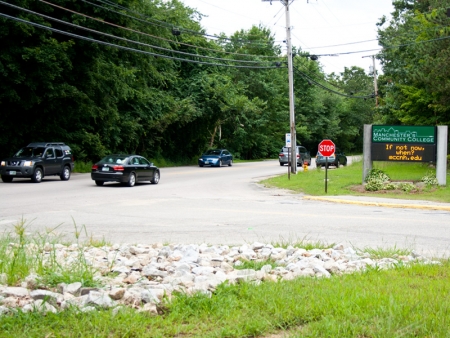 A road safety study of access to Manchester Community College from Front Street has resulted in a series of recommendations for improvement, some of which may be put in place in the near future.

MCC President Susan Huard said some changes will be coming soon, while others will require engineering work and more funding.

A traffic consulting firm and a spectrum of participants, including members of the college community and city and state officials, collaborated on the study of traffic patterns and problems.

The report concluded that speeding, inadequate intersection controls, poor visibility, dangerous pedestrian crossing facilities, decaying pavement and the lack of a second entrance are all traffic safety issues that need to be addressed.

Huard says she is concerned that having only one access to the school campus could lead to serious problems in the event of an emergency, especially considering the winding, sloped entrance to the school and it's narrow connection to Front Street.

"I've asked if it would be possible to have an emergency entrance on Route 293 onto the campus," Huard said. "I've suggested it could be a gravel path with a gate that could be locked and unlocked by emergency personnel."

The safety audit was conducted by Hoyle, Tanner and Associates. It says several short-term changes can be made to improve safety, including cutting back on vegetation at roadside, putting a double-yellow line down Front Street and erecting intersection warning signs.

Long-term recommendations including adding lanes for taking left turns into and out of the campus, aligning the intersection and creating channels for traffic flow, and considering another way of accessing the campus.

Huard said the school will take steps to create lefthand turn lanes. That will include paying for surveying and marking a lefthand turn to the campus from Front Street. A similar left turn lane from the college onto Front Street may require more room and widening of the driveway.

But creating special turn lanes may not fully compensate for the dangers that are inherent in the way the two roads meet.

A pedestrian was hit after getting off a public transit bus near the entrance to the school last year.

Huard said there is a danger that people alighting from buses may assume that all traffic stops when a bus stops, but that safety measure applies only to school buses.

MCC officials have been working with the Southern New Hampshire Planning Commission to identify potential grants for traffic work. Future projects may include a rotary, leveling the hill leading to the school and removal of trees and bushes that obstruct drivers' views.

"Changing our driveway is the priority," Huard said. "If we ever did have a catastrophic emergency, it would be very difficult to stop students from leaving campus and difficult to get emergency vehicles up the driveway simultaneously."