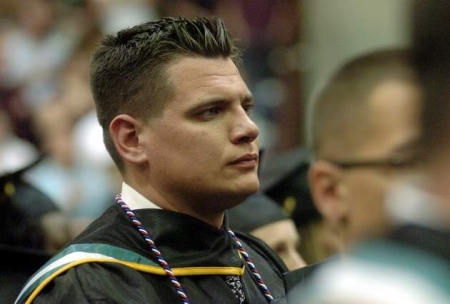 Don't try to tackle life's problems all at once, a record number of Manchester Community College graduates were told Wednesday during the school's 66th commencement.

David A. Fink, a 1988 MCC graduate and major in the Army National Guard, said during his commencement address that the 275 graduates need to embrace change, look upon adversity as a challenge and solve problems gradually.

"Eat the elephant one bite at a time," Fink said.

Fink, who has served tours in Iraq and Kuwait, received a degree in welding at MCC. He went on to earn a bachelor's degree at Southern New Hampshire University in Manchester and now teaches welding at MCC. He said community college students, many of whom are not traditional students starting college right out of high school, know better than most how to juggle school, work and life.

"Balancing the many demands on your time isn't easy," he said.

The graduates at the ceremony, held at the Sullivan Arena at St. Anselm College, were told that their degrees are early chapters in a long book.

"This is a first stop," said Paul Holloway, chairman of the board of trustees of the Community College System of New Hampshire. "You're going to be surprised by how much you've learned in school, but it doesn't stop there."

Wednesday felt like a long-awaited ending for nursing graduates Samantha Crehan and Theresa DeFosses, though.

"It's been a stressful two years. This is like a light at the end of a tunnel," said DeFosses, of Manchester.

"With your degree from Manchester Community College, you have a strong foundation," he said.