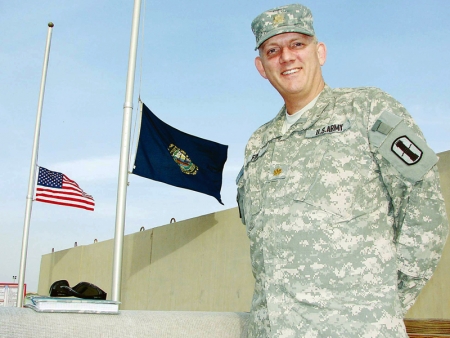 It's been more than six months since more than 700 members of the New Hampshire Army National Guard's 197th Fires Brigade returned home from Kuwait.

And their home state's intensive efforts to help them find jobs seems to be paying off, one soldier at a time.

Jim Goss is executive director of Employer Support of the Guard and Reserve. When the 197th Fires Brigade returned, he said, "they were looking at close to 25 percent unemployment."

As of February, Goss said, "that number is down to 15 percent."

He estimated there are about 125 brigade members looking for jobs; some soldiers are going to school or taking some time off instead.

Goss coordinates with other agencies to plan employment workshops and job-search training for returning veterans. And ESGR resurrected a previous program, "Mission One," assigning a volunteer to each component of the brigade.

David Fink of Manchester was laid off from his job as a quality-control engineer just before he deployed to Kuwait, so he came home unemployed.

He still had his National Guard duty once a month and a part-time position teaching welding technology at Manchester Community College. And he started working with head hunters, sending out resumes and networking.

In the end, it was a personal connection that paid off, Fink said; his father ran into someone who was starting a laser welding department at his company, New England Small Tube Corp. in Litchfield.

Fink landed the job, which has allowed him to return to his real love, welding. "This was just such a good fit," he said.

Denise Roy-Innarelli, an assistant director at New Hampshire Employment Security, said there's a 24-hour "veteran hold" on jobs posted with the state agency so that only those registered as veterans can see them first.

And veterans are "flagged" in the system so employers who want to hire vets can easily find them, she said.