MCC Grad Named One of Union Leader's 40 Under Forty 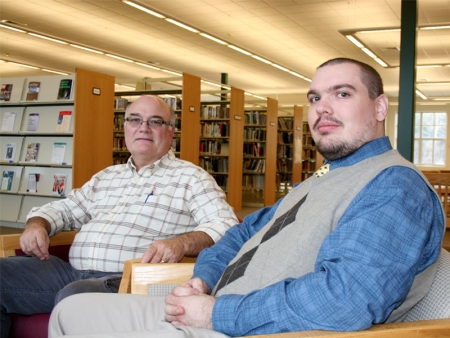 Manchester Community College 2006 graduate Jonathan Lanteigne is one of the "40 Under Forty" of New Hampshire's young people who make a difference. Below is the article from the Union Leader January 30th edition.

Jonathan Lanteigne helps others who have faced battles he knows well

Twenty-six-year-old Jonathan Lanteigne has turned what some would consider a devastating situation into a personal mission to help others.

Lanteigne suffered brain damage after a childhood virus and has spent much of his life helping others with brain injuries get the help and services they need.

Despite his brain injury, Lanteigne graduated from high school and went on to earn his bachelor of science in computer information systems through UNH Manchester.

He's been employed for the past nine years as an Easy Tech at Staples in Bedford.

But perhaps Lanteigne's most important contribution is his work for the Brain Injury Association of New Hampshire.

Lanteigne has had an advice column in the organization's newsletter since 2002.

"Ask Jon" is read by many and helps those with brain injuries secure benefits, education and accommodations, and gives practical advice on what it means to be a brain injury survivor.

Lanteigne was recently nominated to sit on the BIANH board.

As someone who shares the same experience as those he helps, Lanteigne is able to understand the challenges those with a brain injury have to face.

For many, a brain injury doesn't have any outward signs.

"That can be troublesome at times," Lanteigne said.

Because Lanteigne suffers from short-term memory loss as a result of his injury, he keeps a "reminder binder" of sorts at work with him that assists him with his job duties.

He successfully fought to keep it when a new manager at Staples questioned it, but it's just one of the challenges Lanteigne regularly faces.

Still, Lanteigne remains steadfast in his goal of helping others.

"You have to make use of services that are available," Lanteigne said. "You have to accept your brain injury and find out ways you can help others."

Carl Lanteigne, Jon's father, said it's been a long road for his son, but that he has been willing to share both his successes and failures with everyone he meets. "It's a matter of knowing what tools you need to succeed, and not be afraid to use them," he said.