Veterans Gather at College with the Same Goal: To Find Employment 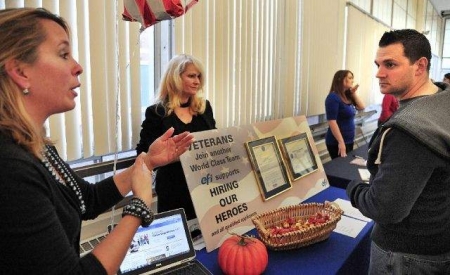 MANCHESTER— Steve Hanson stood out among the many veterans looking for work at the Veterans and Military Service Member Job Fair at Manchester Community College Thursday.

Hanson looked comfortable in his dark suit, white shirt and conservative tie, and he had neatly trimmed hair and an air of confidence as he wandered strategically along the aisles of the job fair.

Hanson, who lives in Nashua, spent 21 years in the U.S. Navy in the submarine force and then joined the work force.

Thursday, he was looking for a senior position as a program or business development manager, similar to a position he held for 4-1/2 years in Merrimack before his job was eliminated and he was laid off Aug. 9.

“I’ve got two or three leads for jobs,” Hanson said as he went from table to table looking for a company that might offer a good fit. “This is a much better show than a couple of the private ones I went to in Boston.”

Hanson and others filled the cafeteria of the college where 40 companies from high tech to insurance, state and federal agencies, police and other emergency responders, and colleges gathered. Some of the veterans wore suits, but many more dressed casually, which was helpful in a building whose air conditioning was knocked out during the October snowstorm.

U.S. Rep. Frank Guinta sponsored the fair and said the event was “the least we can do for our returning vets who preserve our freedom and liberties.”

He said the fair was a “wonderful opportunity for veterans and their families to find a job.” And Guinta praised the 40 participants who signed up “almost immediately” saying they were ready to hire.

Traveling the state, he said, he still hears from many who are unemployed or underemployed.

Brian Gordan of Chester served in the Army National Guard public relations unit. Before he was deployed to the Middle East, he was offered his old job back after he had been laid off and hired as a part-time contractor. The job was no longer there when he returned, and he has been unemployed since his deployment ended.

“I’m a manufacturing guy,” Gordan said Thursday, but he was also exploring courses at New England College to improve his writing skills. “I’ve got some really good leads for some manufacturing jobs,” he said.

Gordan hadn’t yet talked to the representatives at EFI, a company that manufactures large format printers, with a facility in Meredith.

Several veterans were at the fair to explore educational opportunities.

Delina Bickford of Wolfeboro served in the Navy for three years and is currently a freshman nursing student at Manchester Community College. She wants to continue her education and receive a bachelor’s degree in nursing. She was talking to several college representatives exploring her options.

Ladd spent four years in the Army and wants to “move forward and better myself.”

Noah Fallon of Allenstown, a business administration and small business management student at Southern New Hampshire University, had a couple of leads. He was talking to representatives from Turbocam International, a Barrington-based manufacturing company.

“Everybody here is very military friendly and that is nice,” said Fallon, a former Marine.

However, Jerry Pageau of Merrimack, a Vietnam veteran and sometime consultant, found the job fair frustrating because some of the companies were offering jobs out-of-state but not in New Hampshire.

“So many vets are going to be coming here, but there aren’t 150 manufacturing jobs here,” he said. “It’s very frustrating. There are 25 million out of work.”

Pageau moved to New Hampshire form Florida where he worked as a ground penetrating radar expert, training he received in the Navy and through the GI bill, but has been unable to find steady work in the Northeast.

His brother-in-law, Gary Gahan of Merrimack, had a different experience at the fair. Gahan is semi-retired and looking for something different to do to be productive.

“There are IT jobs here that are way over my head,” said the former Marine who served in Vietnam. “I’m lucky if I can turn on my iPhone and iPad and make them work.”

But he noted there were some very interesting positions being offered at the fair, “depending on your skill set.”