Class Sharpens Skills for the Unemployed 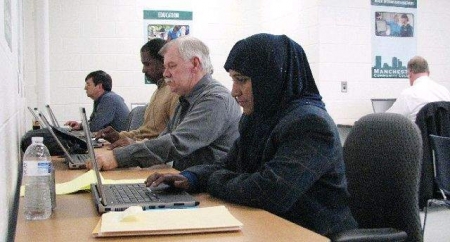 The group includes a nursing assistant who speaks seven languages and dialects, a pediatrician from China, and a man with decades of experience in advanced manufacturing.

What do they all have in common? They’ve all hit a brick wall in this economy and have been unemployed for months on end.

“The fact we’re here shows we haven’t given up,” said Marvin Ellison, who has worked in both the computer repair and culinary industries.

In a conference room lined with computers at Manchester Community College. Ellison and his fellow students are part of the inaugural class of WorkReadyNH, a new state program being run out of four community colleges that aims to improve the job-seekers’ core competencies and professional acumen. The program grew out of discussions Gov. John Lynch had with employers around the state and is based on a national worker certification program.

Lynch himself paid the students a visit last Tuesday to get their feedback.

WorkReadyNH is one of several new initiatives at MCC, as the college, long known for its emphasis on technical training, attempts to position itself on the frontline of a struggling economy and the effort to get people back to work. Central to the strategy is working closely with employers to identify and develop the skills and qualities they’re looking for in new hires.

The college is joining the New Hampshire Regional Advanced Manufacturing Partnership Consortium, a $20 million federally funded program taking place at several community colleges. For its program, MCC will partner with local manufacturers to develop new courses of study in automation and robotics, advanced materials technologies and composites, and other areas of advanced manufacturing.

The college also recently won a $5 million federal grant to provide training and job placement assistance in the health care and health information technology fields. It will be joining with Elliot Health Systems and several other hospitals in the effort.

But for all the emphasis on high-tech skills, it’s important to remember the basics, and that is one of the core goals of WorkReadyNH.

“There are things that ... if we don’t use them every day ... we forget them,” said Steven Cerasuolo, a truck driver and forklift operator. “I’m re-remembering my high school math skills.”

For others, the more important components of the program concern so-called soft skills, face-to-face communication and some of the nuances of workplace conduct.

That’s what Kun Lilian Han, an immigrant from China, where she worked as a pediatrician and in pharmaceutical sales, is focusing on. Having aced her math and English assessment tests, Han said, “I want to work on how to work with Americans and how to talk with them.”

Han wants to continue working in the medical industry, although she’s accepted that she may have to start at a lower tier in the U.S. She wants to work in medical billing and coding.

Others in the group conceded that they were forced into learning — or relearning — some basic skills. Larger economic forces forced them back into the job market.

“I was a machine tool cutter and grinder. That’s a dying trade,” said Rick Talbot, a machine operator. “I had to look outside the box. I got so locked into forcing my own will to make things happen. I needed the perspective of another individual.”

He wants to work in Computer Numerical Control machining.

The program may also have the unanticipated benefit of providing moral support. All of the students can tell stories of sending out numerous applications and getting no response or getting a cold reception when employers realize they’re older applicants who range in age from 43 to 56.

“There’s a level of supportiveness that goes on here,” Talbot said. “As long as that support is there, the only one you can blame is yourself for not applying yourself.”