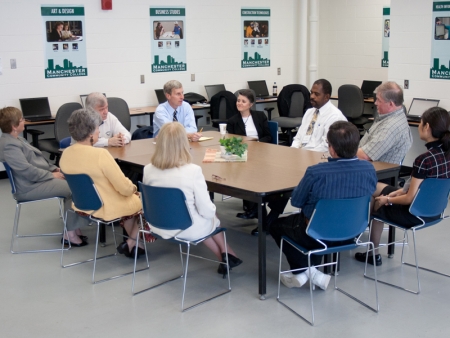 Posted: October 11, 2011
by Communications Director, Office of the Governor

Governor Lynch saw firsthand how WorkReady NH is addressing gaps in worker readiness in the areas of math, reading and problem solving. It is also addressing so-called "soft skills" such as workplace behaviors, teamwork and communications.

"The stories I heard today were quite compelling. These people were eager to get back in the workplace and WorkReady is helping them by highlighting their strengths and identifying which areas they need to improve upon," Governor Lynch said. "By earning certification through WorkReady these workers will able to demonstrate to potential employers they have the skills needed in the workplace."

The program was developed after hearing directly from business leaders through Governor Lynch's series of Jobs Cabinet Roundtables held across the state.

"As Governor, my number one focus continues to be jobs and the economy. Our unemployment rate is one of the lowest in the nation, but I will not rest until everyone who wants a job in New Hampshire can get a job," Governor Lynch said.

Unemployed workers who choose to participate in WorkReady will take a test assessing their skills, and there is available remedial training in basic areas where necessary. Upon completion of the program, workers will receive a nationally recognized certification, which they can take to potential employers, giving business owners confidence that new hires will have the necessary skills they are looking for.

WorkReady NH is being offered at four pilot sites including River Valley, White Mountain, Great Bay and Manchester community colleges. WorkReady is the final component of New Hampshire Working, a three-part initiative introduced by Governor Lynch last year. It is designed to help companies and workers avoid layoffs, help unemployed workers return to work and, the third and final part, provide training to help workers get new jobs. Under the first part of New Hampshire Working, the state is able to partner with businesses and workers to provide an alternative to layoffs. Companies and workers agree to reduced hours instead of layoffs, and the state makes up part of the lost wages for workers through unemployment benefits.

Workers will keep their jobs, their health insurance and most of their income. Companies will be able to retain the skilled workers they need to recover, and taxpayers will avoid increased costs as the demand for state services increases as unemployment rises. This part of New Hampshire Working is modeled after successful job-share programs in other states.

The second part of New Hampshire Working reduces upfront training costs for companies - often an impediment to hiring - and is providing on-the-job training to help workers get new jobs. Unemployed workers are able to continue to receive unemployment benefits while participating in up to six weeks of training at a potential new employer. A company has until the end of that period to decide if a worker has the skills the business needs.