Newman: Job Creation is in the Classroom 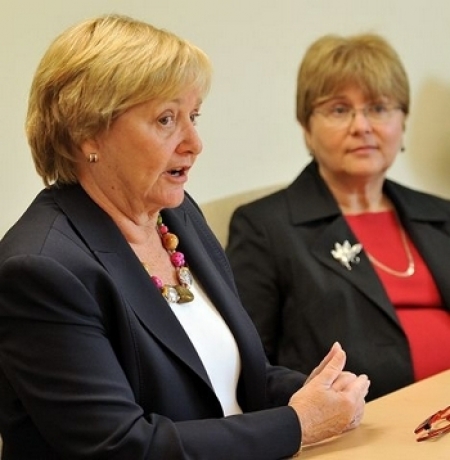 "I see community colleges as the gateway to higher education for so many people at all levels," said interim chancellor J. Bonnie Newman. "Given the fluctuation in the economy at the state and national levels, the required job skills and training change so quickly."

Newman assumed her new duties two weeks ago and since that time has traveled to five of the system's seven campuses to visit with students, faculty and administrators. On Friday she visited Manchester Community College and will visit the two remaining campuses next week.

"The tone and culture is a little bit different on each campus," Newman said, but "the faculties' concern about their students is consistent. There's real commitment to their mission."

Newman is not new to higher education in New Hampshire. Like her longtime friend, former Gov. Walter Peterson, she served as interim president of the University of New Hampshire as well as holding the community college system's chancellor's post. Newman also served as interim dean of the Whittemore School of Business and dean of students at UNH as well.

She served in both the Reagan and George H.W. Bush administrations and as Judd Gregg's chief of staff when he served in the U.S. House.

Newman also has strong ties to the business community in New Hampshire, both as a business owner and executive and as past president of the Business and Industry Association.

Newman said the first call she made as chancellor was to Department of Resources and Economic Development Commissioner George Bald, asking him how they could work together and to make sure the state's economic development agents are up-to-date on the community colleges.

"This does not happen in isolation or in an ivory tower setting," said Newman. "This is the real world, this is an opportunity to problem solve and help create the next economy."

She sees the community college system as a vital link and wants to work closely with the system's business partners and be responsive to their needs.

"The need for a skilled, well-trained workforce has never been more vital than right now," Newman said. "Your ability to compete in the global marketplace is truly dependent on the community college system to provide those skill sets."

She used the production of Concord Coaches as an example. "Years ago we made Concord Coaches in Concord. They were really good, they were the best, but you do not train people today for coach manufacturing."

She worries higher education has become so expensive that some students may be shut out financially. Tuition of $5,000 or $6,000 a year may not look like much compared to some private colleges that charge $55,000, she notes, but "if you're unemployed or a single parent who struggles to keep up with the mortgage payment that is ballooning, every $100, every dollar makes a difference."

The two-year budget passed by lawmakers in June made significant reductions in state funding to both the university and community college systems, which in turn raised tuition.

Newman said she does not envy lawmakers who have to make some very difficult decisions, but encourages them not to risk fundamental programs essential to the state's future.

"Some people may shrug, but the person wheeled into an emergency room on a gurney is counting on the nurse who is there to be well trained, and that's what we do," She said.

Newman said a civil society depends on a well informed and educated citizenry to survive. She said the country's founders like Thomas Jefferson and John Adams understood for the country to thrive and prosper, it needed to educate its people.

"Education at all levels is a public responsibility, it's a public good. I recognize there are those who believe it should be a private responsibility, but for a large portion of our fellow New Hampshire citizens, there is no other option but to access a quality public education," Newman said.

There are consequences to lawmakers' decisions, she said, and they need to be aware of what they are. But, she noted, public higher education officials have to develop new models moving forward. "In terms of the state's participation, we're going to have to be more creative and work with the business community," Newman said.

She said she recently met with several lawmakers to explore tax credits for businesses willing to fund scholarships and programs at the community colleges.

Newman noted that 85 percent of the community colleges' students are from New Hampshire.

Manchester Community College President Susan D. Huard noted those are students who are working and staying in New Hampshire. "They're not educated here to take their education somewhere else," she said.

And Huard noted community colleges have the richest classrooms that range in age from teenagers to senior citizens. The diversity provides both theory and real world experience, she said.

Newman said she believes the community colleges are the state's best-kept secrets. "My job and Susan's job is to get the message out," she said.