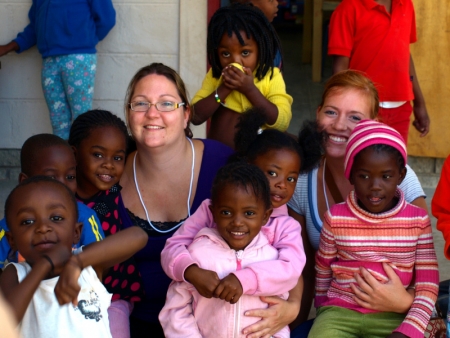 Eight Manchester Community College students and an alumnus are on a mission: They're teaching children at a Christian school in the southwestern African nation of Namibia for two weeks.

The group is being led by the school's Americorps/community service coordinator, Anna Gdanian, an alumnus, who went on a teaching mission to the Talitha Kumi Christian Academy in Arandis last year. The group of eight women and one man are combining their love of education and religion as they work with primary schoolchildren, many of whom are foster children whose parents have died or abused them.

But the photos and words the volunteers have posted on their blog, including camel rides and dance moves, show it's far from nose-to-the-grindstone work.

Gdanian's enthusiasm prompted members of Team Namibia to gather school supplies and planning lessons and to raise a money for the two-week plus trip that began Aug. 1. Travel and lodging arrangements for the team were made through Christ's Church of Amherst, which has a long-standing mission program in Namibia to care for orphans and vulnerable children in several locations.

Pastor Darin Shaw said the church has sent teams to Namibia almost every year for the past 10 years.

"I was going to send a team this year," said Shaw, so it was logical that the church would make the travel arrangements for Team Namibia.

As it turned out, he said, his church didn't send a team, but the MCC team is working under the leadership of Michael Knight, the youth pastor from Christ's Church, who is also a seminary student in Charlotte, N.C.

Talitha Kumi is operated by Hope's Promise Orphan Ministries, based in DeLand, Fla., but is supported by a number of church partners elsewhere in the United States.

Shaw said it costs $3,140 for each person on a mission team, money team members raise from various sources.

While some might argue that sending that amount of cash would be a better idea than sending people, Shaw disagrees.

He said most people here don't understand the impact HIV/AIDS has in other countries. Here it's a manageable disease. In a place like Namibia, he said: "It becomes a very quick death sentence."

Many people die of diseases their devastated immune systems can't fight, he said, so they aren't always counted as AIDS deaths. Because of the high incidence of HIV/AIDS, there are many children without parents in Namibia.

As a consequence, the people on missions offer individual attention that is irreplaceable, he said.

When they take a child on their lap, or talk face to face, or take a child by the hand, said Shaw: "They are reminding them that they are important."

The one-to-one contact from someone who has come from far away is a way to show the children they are valued, to bolster their self-image and to inspire them to keep learning. While sending money is good, the personal interaction is critical.

"It's being there," said Shaw, that can change the future for a child.

On the group's blog, team member Patty Lovejoy wrote: "We immediately knew that this was going to be a challenge, however rewarding. The children are sweet, loving, instantly accepting, but very typically rambunctious kids. We were soon overwhelmed by them, and their questions."

There was no hesitation on the part of the children when it came to those questions, like that posed to Chrissy Neville. “Miss Chrissy, what are those on your arm?” was the question about her freckles.

"You are always met with a hearty hello and within a few sentences exchanged you have made a new friend. Smiles are always seen, laughter is often heard, and playful joking with students makes the day go by quicker," Tripp wrote.

Gdanian wrote: "The down time here in Arandis is very important because we are able to spend time with the children and really get to know the culture of Namibia." While Talitha Kumi is a private school, Shaw said his mission teams also work in the public schools, trying to educate children about the dangers of casual sexual contact that can result in HIV/ AIDS, and encouraging them to continue their education.

"You're trying to convince them... You're hoping to change a life," said Shaw.

Not all the changes are in the children.

As Tripp blogged: "The real joy for me has been the relationships we've been able to foster with the amazing students of Talitha Kumi Christian Academy."