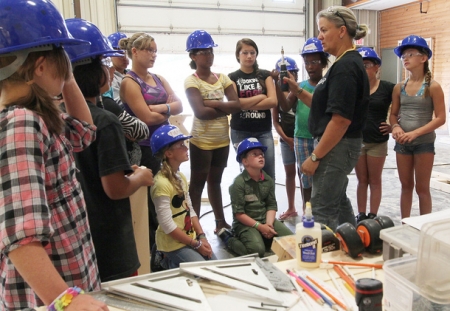 Standing on a milk crate for a boost, 10-year-old Maggie Pare put both hands on the standing compound miter saw. With the assistance of Elaine Hamel, Maggie, wearing a blue hard hat and safety goggles, cut halfway through the piece of wood at a 30-degree angle, then finished the job, cutting all the way through.

Maggie was the first of the Nashua elementary and middle school girls in the building trades lab at Manchester Community College to use the saw Wednesday. The other girls watched quietly and gave Maggie a round of applause when she finished.

"How was it, Mags?" Angela Barker, a councilor at Girls Inc., asked.

The piece of wood that Maggie was cutting eventually would become part of the picnic tables the girls were building this week, part of the Girls in Construction program. Forty girls from the Girls Inc. programs in Nashua and Manchester are taking part.

The goal is to get more middle school-age girls involved in trades programs.

There is going to be a need for more females in construction jobs, as the field is facing a large number of retirements in the coming years, said Hamel, director of Girls at Work, one of the program sponsors.

Even if they don't pursue careers in the field, Hamel said, the self-confidence from learning how to use tools and build on their own will benefit them.

Feedback from Manchester girls there earlier in the week was eye-opening, Hamel said. One girl wrote in a survey that she liked learning how to use a saw because she didn't feel stupid any more.

That kind of self-confidence can carry over across a lifetime, Hamel said.

"We're building them up through building," she said. "These girls are rock stars."

Hamel has been working as a contractor for 25 years. She currently works in residential renovations. More than 5,000 girls have gone through similar programs run by Girls at Work, but this is the first geared toward girls in middle school or about to enter middle school.

"We want to get to them before they get into the high schools," Hamel said.

Females are vastly underrepresented in the trades programs across the state's public schools. Of 840 students enrolled last year, 48 were female, said Mary Laturnau, with the state Department of Education Career Development Bureau.

"I should see every single hand up," Hamel said.

Sawdust was scattered across the floor as the girls worked in teams, sanding down large panels of wood and carrying them over to be cut. Many of the girls in the program said they already are involved in the technical education programs at their schools and had experience building things like birdhouses.

Alexus Farrell, a seventh-grader at Pennichuck Middle School, said she likes the technical education class because she gets to keep the things she builds. Last year, students built yo-yos and a gumball machine, among other things, she said.

When asked what they wanted to do, most of the girls weren't aspiring to work in construction. One wanted to be a fashion designer, another wanted to be a veterinarian. Nashua student Amanda Mwangi wants to be a doctor, but she was excited about taking part in the program.

"It inspires girls to do more in life," said

Along with picnic tables, the girls this week are making Adirondack chairs. The furniture will be sold privately, and the money will be used to help sustain the program.

On Friday, students participating from Nashua and Manchester will gather for the program's final day, when they will build things they will get to keep. They also will hear from speakers, including Karen White, director of the Manchester School of Technology, and Susan Huard, president of Manchester Community College.

Laturnau said funding from the Carl D. Perkins Career and Technical Education Act of 2006 helped to pay for the program.

"This is really going to promote careers in construction to middle-aged girls so when they get to high school, they know it's an option," she said.

The wood used for the program was donated by various local companies, including Meridian Construction Corp., P.J. Currier Lumber Co. in Amherst, and Belletetes Lumber in Nashua.

Catherine Schoenenberger, director of the state chapter of National Association of Women in Construction, summed up the intent of the program in one word: empowerment.

"Instead of feeling like they need a man to do it, they'll know how to pick up a drill or use a saw," Schoenenberger said.

This article was originally published on the Nashua Telegraph website, but has since been taken down.