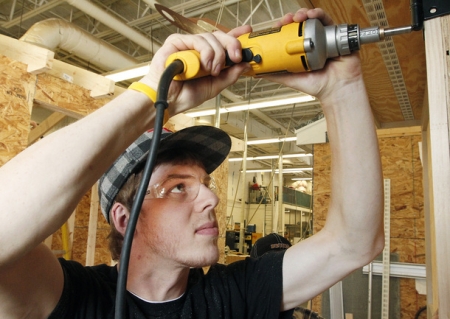 Most people in today's work environment would be happy to land a job out of college, but Seth Miller snagged two promising offers last month just a couple of weeks after graduating from Campbell High School.

Miller, 18, of Litchfield, made his good impression by placing fourth in the nationwide carpentry competition at the Skills USA National Leadership and Skills Conference in Kansas City, held June 19-24.

The Haskell Company and KBR General Contracting, both large construction and design firms, have spoken to Miller about his work and offered him a job once he gets out of school, Miller said.

The companies also mentioned summer internships, which Miller said he hopes to take advantage of next year. The commercial work could involve construction on all types of buildings, from skyscrapers to power plants to hospitals.

Miller starts class at Manchester Community College on Aug. 29. He plans to graduate in two years and then enroll in Wentworth Institute of Technology, but anything could change with his fast-rising reputation.

"When I got back from nationals, it hadn't hit me what a big accomplishment it was," he said. "The fall of my junior year I knew nothing, and a year and a half later I'm ranked fourth in the country."

That might sound cocky, but Miller's bravado comes off as passion for his trade. He credits his building trades teacher John Conrad for much of his sudden rise.

"I'm so grateful; he taught me everything," Miller said. "He's had a huge impact on my life, as a teacher, friend, mentor, everything."

Conrad was quick to fire praise back in Miller's direction.

"He's a super bright kid; he was my right-hand man and I'm really going to miss him," Conrad said. "You don't get many kids that take off with it that fast and really get into it.

"To be his age and know what you want to do is rare. I couldn't be happier for him. I'm very proud of him."

Miller has been happily busy this summer, working 60-65 hours a week and dividing his time between Goodale's Bike Shop in Nashua and many construction side jobs for local residents.

He's been getting "phone call after phone call" for side jobs, he said.

Miller plans to register his own company name this fall, when school starts up and he'll have a few more free hours in his schedule.

"The farm's closed, but I'd like to keep the name going somehow," he said.

The national competition was based mainly on an eight-hour day of building, where Miller and 49 other state champions worked to complete a small shed made of wood and steel.

Miller and his fellow competitors had a chance to see the construction plans for 15 minutes the day prior to the challenge, and Miller noticed something he’d never made before: a hipped roof, where all sides slope gently downward to the walls.

Miller got straight to work. He broke out his book, read up on hipped roofs and even drew on the dresser in his hotel room, outlining his plan on it as if the tabletop was a new piece of wood.

The next day, Miller finished his project with five minutes to spare.

He said only about 10 other kids of the 49 competitors were able to finish in time.

"I know I did pretty well as I was looking around; I was thinking third or fourth place," he said. "On the last piece of wood, I had a moment and cut it five inches too short, but the rest was perfect."

Their final ranks also included scores on a full day of written testing and other station exercises during the conference.

With mentors, teachers and students, there were about 15,000 people at the convention throughout the week, Miller said, including over 6,600 students in about 90 different competitions.

He came to the competition with wide eyes last summer, when he placed 12th in the country as a junior, but he still felt the same excitement the second time around.

"I went into it knowing what it was like, and it still overwhelmed me," he said. "The competition was a blast. People asked me, 'How was it?' and I just couldn't talk. It was the best week."

This article was originally published in the Nashua Telegraph, but has since been taken down from their website.