Ideas To Build On 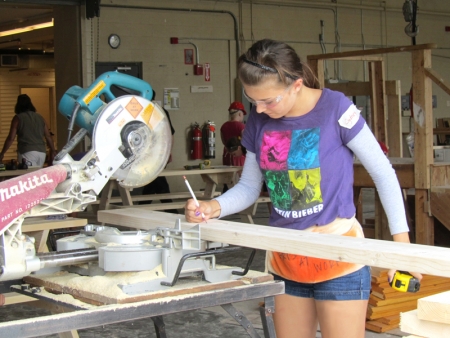 Working on a Picnic Table
Photo by MCC Photography Staff

Program gives girls a taste of careers in construction

Vocational insights: Power equipment is only part of the learning.

Patrisha Biron was reminding Caitryn Gibeau to check the spacing between boards on a picnic table they were building Monday. "Run your fingers along," Biron told Gibeau.

The two 11-year-olds were among 18 members of Girls Inc. Manchester who are taking part in Middle School Girls in Construction at Manchester Community College this week.

The 18 Manchester girls were building picnic tables Monday and will be back at work on another project today.

Nashua Girls Inc. members are scheduled to be there Wednesday and Thursday and both groups will be there Friday to build items they can take home.

The girls will also hear from speakers about potential careers in the construction and engineering fields as part of a program to promote those fields are career choices for girls in New Hampshire.

The impetus for the program is the statistics regarding high school students in the vocational school construction programs. Of 840 students, only 48 are female, said Mary Laturnau of the New Hampshire Department of Education Career Development Bureau, "This is a primary way to get them," she said.

Elaine Hamel, director of Girls at Work, a non-profit dedicated to empowering girls by teaching them woodworking, design and carpentry skills, was assisted by two other female instructors, but Hamel seemed to be everywhere at once. "Listen up" and "Hold your frames" were among the admonitions as the middle school-age girls occasionally were in too much of a hurry or didn't measure carefully, put screws in crooked, or had their safety glasses atop their heads instead of over their eyes as they worked in teams sanding, cutting and assembling tables. Hamel said it's not every day that the girls get the opportunity to build something. "The goal is to empower them," she said. "They walk away thinking they can build their own house."

That may be a slight exaggeration, but the enthusiasm was obvious.

"I didn't know it was gonna be this fun," Biron said. "It looks harder than it is."

Although Gibeau had to stand on a milk crate to be tall enough to use the power saw, she was the perfect height when it came to using the power screwdriver on the table top, not having to bend over.

Hamel said the teamwork is an important part of the project and so she deliberately broke up "friends" when determining teams. She said working as a team builds new bonds among the girls.

As 12-year-old Zania Norman carefully measured, to make sure the screw position in the center plank of the table top would tie the plank securely to the center support underneath, Catherine Schoenenberger of the National Association of Women in Construction said: "They've never had a screwdriver in their hands."

In this program, the girls are using power tools — saw, sanders, screwdrivers — but also learning the importance of lower-tech tools of the trade — tape measures and pencils.

While they are learning basics of construction, such as how to support a tabletop effectively, some of what is covered is common sense, like how close the board of a bench seat should be. Enough space to permit drainage after a rain, but close enough to avoid pinching butts.

At 9 years old, Claire Hoyt is the youngest participant, but she already has some experience. "I helped my dad build a chalkboard in my room," she said. "I like to build."

Not everybody would consider a career in the building trades. Norman, whose sister, Aliyah, 10, is also in the program, said: "Probably not, because it's a lot of work."

Cydney Nordstrom, 12, said: "I do enjoy wood work. I did wood shop at school."

But Nordstrom said her career choice of fashion designer has been set since she was a little girl and she doesn't plan to change.

That's fine with those behind this program. They aren't looking to have women take over the building trades and engineering, but they want to make it a viable career option for some who might not otherwise consider it.

The workshop is funded by the Carl D. Perkins Career and Technical Education Improvement Act of 2006, in partnership with the ITM Partnership (Information Technology & Manufacturing), the New Hampshire Department of Education Career Development Bureau, Manchester Community College, Girls at Work and the National Association of Women in Construction.