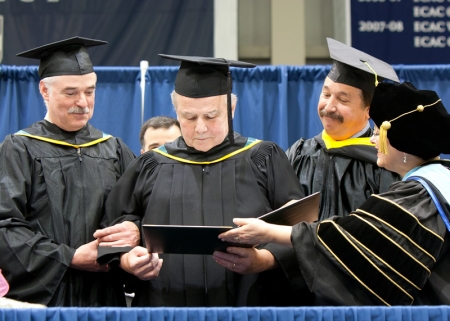 At its 65th commencement May 25, Manchester Community College awarded an honorary Associate in Science degree in Electrical Technologies to Bruce McKenna of Goffstown. McKenna began his MCC career in 1993 as an adjunct faculty member teaching non-credit electrical apprentice courses to evening students; by 2009 he had created (primarily on his own time) a credit-bearing certificate and degree program in Electrical Technologies.

A U.S. Navy veteran, Bruce began his electrical career as an apprentice at the Portsmouth Naval Shipyard, and began his teaching career as an instructor in the U.S. Naval Guided Missile School in Virginia. After leaving the service and qualifying as a Master Electrician, he held a number of positions in private industry while also running his own electrical contracting business, and, in 1993, joined the college. Since that time, his passion for the college and his professional affiliations have led directly to donations of equipment and software to the Electrical Program, the creation of a professional advisory board for the program, and opportunities for students to liaison with business and industry partners.