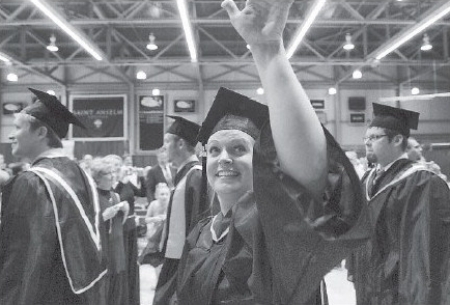 Graduate Erin Slide of Merrimack waves as she makes her way to her seat at Manchester Community College 65th Commencement
Photo by David Lane, Union Leader

The 247 students who graduated from Manchester Community College Wednesday night looked to their commencement speakers and saw a brilliant vision of what could be.

In a nod to the school's 65th anniversary, the ceremony was as much a homecoming for the school's two commencement speakers as it was a celebration of new beginnings. Both speakers — Richard Horan and Dr. Linda Gifford — went on to achieve professional success after graduating from Manchester Community College a generation ago.

Horan, a Manchester native, graduated with an associate degree in automotive technologies in 1975, when the school was still called the New Hampshire Vocational Technical Institute. He later went on to found Precision Imports, teach at MCC and become a member of the New Hampshire Automotive Education Foundation.

In his speech to students, Horan described his own path to success and emphasized the value of hard work and personal initiative.

The key to success after graduation is to continue learning throughout life, Horan said, urging students to take continuing education classes or pick up new skills at work. In a society where most people change careers several times during a lifetime, Horan said, education should never stop.

"Don't let this diploma be the end of your education," Horan said. "No matter what your new degree is in, keep learning."

Lifelong learning is something that Dr. Linda Gifford, the night's second commencement speaker, knows well. After earning an associate in science degree from MCC in 1992, Gifford went on to earn a bachelor of science degree from Boston University. Over the next 10 years, she would go on to the University of New England in Maine, where she earned a master of science in education and a doctorate of osteopathic medicine. Gifford has served as the state of Maine's medical examiner since 2002.

Gifford told the graduates — many of whom work full time, have children or are the first college graduates in their families — that they have ultimate control over their lives.

After Gifford spoke, students took the stage one by one to receive those shovels: their college degrees. In the words of Dr. Susan Huard, the president of MCC, those degrees are some of the most valuable tools that graduates will ever use.

"Your accomplishment is a true investment in yourself. No one can take it away from you," Huard said. "As the old salesman says, it will not rust, bust or collect dust."