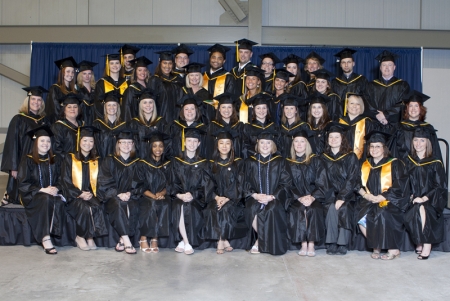 "The tradition of nursing pins began in 1855, when Queen Victoria presented a pin to Florence Nightingale in appreciation for her work with the British soldiers during the Crimean War," says Charlene Wolfe-Stepro, chair of MCC's nursing program. In the 19th century, many hospitals in the U.S. adopted Nightingale's principles and founded special schools for nursing. Gradually many of the schools were moved to colleges and universities, which then began giving Nursing Pins to their graduates. "The nursing pin of each school of nursing is unique," says Wolfe-Stepro, "and only graduates of that school may wear the pin as a statement that they have successfully completed the program."

Nursing Spirit Award recognizes a graduating senior who displays a love of the college, the nursing program and the profession, and who, by infectious enthusiasm, motivates and inspires others around her. Recipient: Patricia Picard of Fremont.

Nursing Excellence Award is presented to a graduating senior with a high academic standing, ability to apply theory to practice, and dedication to the art of caring. Recipient: Liana Shackford of Manchester.

Alumni Achievement Award: This new award is presented to an alumna who has significantly contributed to the nursing program and its students, by selflessly volunteering her time, in countless hours of mentorship, to improve student success. Recipient: Jessica Boggiatto, Class of 2010, of Derry.

The Ed and Eleanor Kelley Memorial Scholarship Award is given to the student who most demonstrates professional promise in the areas of therapeutic communication, critical thinking and compassion to patients and their families. Recipient: First-year nursing student Karen Carpenter of East Hampstead.