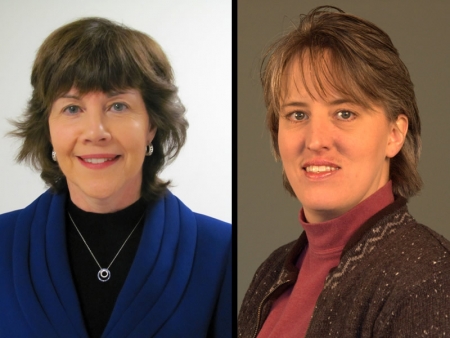 Lisa Hagemann of Dynamic Network Services and Karen Van Der Beken of Easter Seals New Hampshire have been appointed to the College Advisory Board at Manchester Community College. The advisory board provides a link between MCC and area businesses, government, nonprofits and other educational institutions and serves as an advocate in promoting MCC within the community.

As Vice President, Engineering, Hagemann oversees the project planning, development strategy and team leadership for Dyn Inc.'s consumer brand (DynDNS.com) and its enterprise platform (Dynect Platform). With a BA in communications from Temple University, Hagemann started her career as a graphic designer before transitioning to web design and later, software programming. Prior to moving to NH and Dyn Inc., in 2005, she was Associate Computer Programmer/Analyst for the New York State Division of the Budget. She was named Lead Developer at Dyn in 2008 and named to the executive team in 2009.

Van Der Beken is the Senior Vice President of Development & Communications at Easter Seals NH, where she began as a volunteer and served as a board member from 1989-1999 (including a term as chair). Before joining ESNH professionally in 2005, she was the senior manager, business planning and order services for Wang Labs, and most recently, ran Van Der Beken Resource Development Consulting. A UNH graduate with both a BA in mathematics and an MBA, she has served on the board of the Mental Health Center of Greater Manchester, and chaired its development committee.

This article was originally published on the Nashua Telegraph, but has since been taken down from their website.