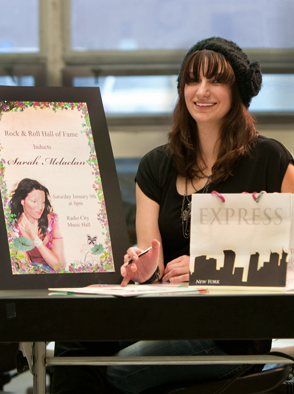 Lauren took time off after graduating from Londonderry High School back in 1998 and moved to Boston. She returned to NH after a few years, and visited MCC during her college search. She remembers her first impressions about MCC: "I liked that MCC had both Graphic Design and Marketing programs, the classes were smaller, and there was a hands-on approach to the classes that was very appealing." She was admitted to the Graphics Design program and started in the summer of 2008.

Her initial impressions have been reinforced since then. "All of the professors in the Graphic Design department are awesome, and they work with you above and beyond the classroom."

Lauren is considered a non-traditional student, because she's a few years older than many of her classmates, and that was initially a concern. "Coming in as an older student, I was worried that I wouldn't be able to make any connections with other students." The exact opposite has been true. Lauren has made some great friends in her classes and her "age has never been a factor." She says most of her classes don't even seem like school because they are so creative and fun. "So far my favorite classes have been Typography and Color Theory – I really liked the projects in those classes... my Sarah McLaughlin Rock and Roll Hall of Fame poster and my Express shopping bag are my best so far."

Lauren plans to earn a degree in Marketing in addition to her associate in Graphic Design, so that she can be a "double threat" when she goes to work in a marketing firm. "I'm going to move back to Boston and work my way to the top of a marketing company by job shadowing with a production manager or designer. I am confident that the combination of graphic design and marketing degrees from MCC will get me hired!"