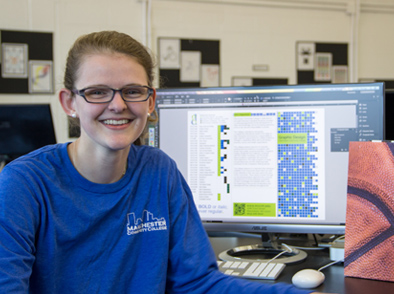 "I had been accepted into a couple of four-year colleges (out of high school), but I decided to take a year off to work," she says. "I didn't know what I really wanted to do. And then I was driving past MCC one day and I started doing some research. I learned that they had the graphic design program I wanted. I had some reservations when I first got there, but now I can't say enough good things about the school. It's an amazing place."

The Bow native, who lives less than 10 miles from MCC, enrolled as part-time night student in 2013 and expects to graduate in 2017. Liz currently works full time at a screen printing shop. She plans on studying for MCC's web design certificate after earning her associate degree in graphic design.

The experience and accessibility of the graphic design professors is one of many reasons Jackson values her time at MCC. "The teachers all have experience in the industry and they're happy to invest time in you to provide pointers," she says. "I'm able to talk with my professor about working in a screen printing shop because she once did the same job."

Jackson also loves the class projects, such as designing magazine ads and creating shopping bag designs. "The projects are fun and interesting. We learn everything we need to know to have a career in the field," she says.

The woman who never considered a community college has now become a passionate advocate as an admissions ambassador for the graphic design program. Even though she's a night student, she has also immersed herself into the many clubs and activities offered at MCC. In January, she was one of nine students who traveled to the Give Kids the World Village in Florida to assist hundreds of children facing life-threatening illnesses.

"It just keeps getting better and better," she says. "I keep finding more great stuff about MCC."