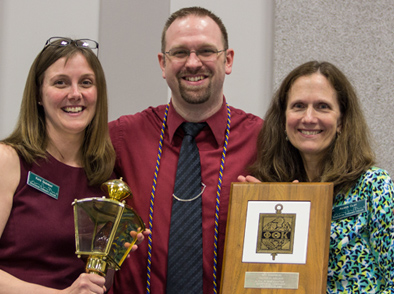 Adam Moy of Manchester didn't want to go to college originally. He entered the workforce after high school and put in fifteen years of work at AmeriCorps NCCC and Easter Seals. While earning a lot of life experience in the job field, he desired something more but wasn't quite ready to conquer his fear of committing to college.

Enrolling at MCC turned everything around for Adam. What he discovered when he walked through the doorways of MCC to begin his higher education journey was a world in which he felt quite welcomed. He quickly rose to the top of the student body as he continually excelled in his classes, achieving a 4.0 GPA. In addition to his studies Adam became involved and engaged in the student life areas of college, joining many student clubs, organizations and community service opportunities. Adam 's hard work and dedication within the Student Life department has been above and beyond the call of duty for any student volunteer.

In January 2014, Adam led a group of MCC students down to Give Kids The World Village in Florida for a week of volunteering. Give Kids The World Village is a nonprofit "storybook" resort, where children with life-threatening illnesses and their families are treated to week-long, cost-free fantasy vacations. The trip was so successful, that each year since, a new batch of MCC students have been making the trip south to volunteer.

Adam's success academically, his composed demeanor, and the respect that he earned from his fellow classmates is not only inspiring to the MCC community, but was noticed system-wide, as seen with his appointment as a member of the Community College System of New Hampshire Board of Trustees.

Adam graduated in May with an associate degree in Business Communications, and is now enrolled in the 3+1 program where he will transfer 90 credits and earn his bachelor's degree in Communications.