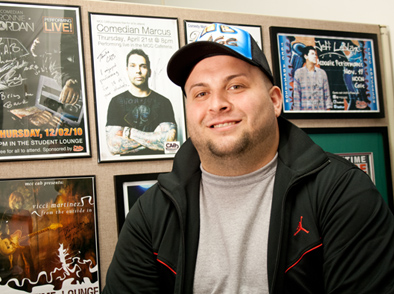 The journey Boris has taken is like that of many MCC students. Born in Split, Croatia, Boris and his family immigrated to Manchester when he was seven years old.

He finds the MCC culture to be comforting and encouraging. "The MCC faculty and students are so awesome, it's a giant family."

"One of my favorite things about MCC is being involved in different clubs." As CAB's (Campus Activities Board) current president, Boris promotes and represents MCC to the fullest. He and other CAB members put on events like Stress Busters with showcases of Candy Kick Off, Music Massage & Munchies. Boris is also part of the Student Senate and a member of the new Psychology Club.

You'll also find Boris working as a clerk creating student IDs, answering phones, and/or resolving student questions in the Academic Success Center, and also in the Student Life Office as part of his Work-Study responsibilities. He also works as a security officer off campus.

When he's not showing off his MCC pride, Boris enjoys watching and playing sports like football and basketball. His music taste is eclectic with techno, hip-hop being his favorite.

Among his reasons for attending MCC he mentioned the amount of money he saves from attending community college first. Also it was the confidence he felt at MCC. "I thought it was a good place to start and that I would get the foundation I need" to fulfill his dream of a career in Criminal Justice/Forensic Science.

He credits his support system for his current successes. "My parents encouraged me to get my education. I push myself to have a better future."

When he has completed his coursework at MCC he plans to transfer to UMass Amherst to continue his studies in the field of Criminal Justice/Forensic Science.