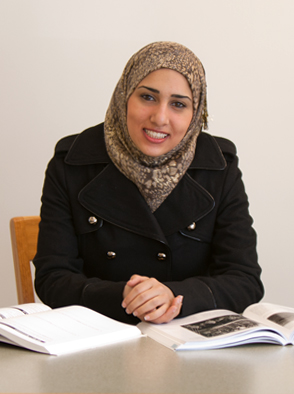 Zaynab and her family left their native Iraq because of the war, and spent two years in Syria before achieving refugee status and resettling in Manchester in August 2008.

Zaynab finished her high school education in Syria where Arabic is the primary language. Knowing she wanted to continue her education but unsure how, Zaynab spent her first six months in Manchester researching options. She chose MCC because her friends, her fiancé (who is a former MCC student) and the staff at IINH, the refugee resettlement agency, told her it was the "best place to start."

From day one at MCC her goal has been to major in biology at UNH Manchester, so she works closely with her MCC advisor and advisors at UNH-M to make certain her classes will transfer. Zaynab plans to take her general education requirements at MCC, and then continue on to UNH-M to complete her bachelor's degree.

Although she studied English for eight years at schools in Iraq, Zaynab knew she needed to improve her American English skills. In Iraq, she said, "we only learned basic grammar and didn't practice talking." She invested in ESL and English classes at MCC to give herself a good foundation for her future at UNH-M.

In addition to her classes at MCC, Zaynab has a job and "likes to watch the news to know what's going on all around the world, especially in Iraq." Asked what she likes about Manchester, she replied, "the weather, the nice people, and it's a quiet city."